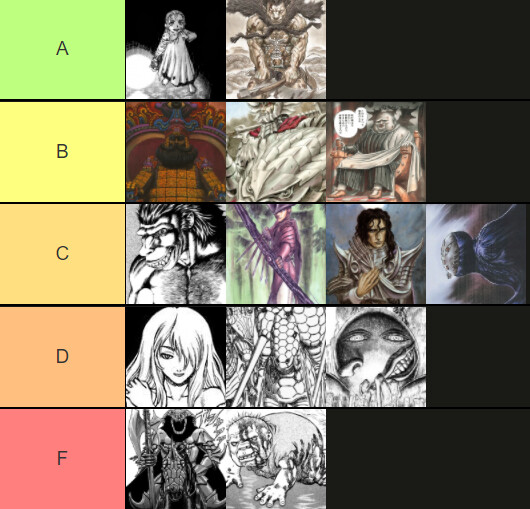 Why? Don’t ask. I’ll just explain my rankings now. The list is in no particular order, mostly cause I can’t be bothered. Someone ahead (i.e. left right) of another does not necessarily mean I think they’re better or that I like them more. Took like a second on each apostle to decide their placements, so I could have been too quick on some.

Snake Lord - Kind of a more “average” apostle in my eyes. Nothing bad with that but he doesn’t really stand out, just slaps around Guts a bit and dies. Nothing to really positively say, thee most generic one (fitting since he was the first demon we seen Guts fight though not the first we seen Guts kill).

Unidentified Roaming Apostle - My man was Guts’ easiest apostle kill. Almost made him his own special tier for how, just, stupid he is but the 2016 anime, surprisingly, saved him as they gave him a little story arc that I kind of enjoyed and was entirely caught off guard knowing how little his role is in the manga. Still, absolutely nothing to praise.

Unidentified Female Apostle - Thee first demon Guts was shown killing in the manga though not the first demon Guts has killed story wise. She’s honestly ranked above the other F’s cause she’s hot, other than that she’s just pretty generic and always depicted as nude, so I had to crop off the rest of her body for the tier list.

Borkoff - Mans was thee one to hold back Guts during the Eclipse. He was the one biting down on Guts’ arm that he later cut off in order to attempt to stop Femto. Being one of the only few apostles to interact with Guts and make it out alive is really something. Other than that though I know little. Only read the Millennium Falcon Arc once years ago at this point (gonna re-read it when I get the physical copy soon) but I doubt it’ll add any worth.

Egg of the Perfect World - I’d say he’s the highest in D tier, borderline C, but I don’t think he as a character added anything too important to the story. He, like the behelit he’s shaped like, act as an important catalyst for the story and play a major role in it but it’s not because of who he is but more of what he is. Still his story is at least somewhat interesting and sad, I enjoy him. One of the more unique apostles too.

Wyald - Everything everyone thinks what Berserk is like. He’s just wyald (his name is pronounced like the word “wild”). Killing, R-wording women, he’s just a mad dog. Still some part of me really likes that kind of stuff depicted in a character, a physical manifestation of one’s Id. Entirely personal preference since I’ve found that most people dislike Wyald.

Irvine - Pretty badass but just a stoic archer. We don’t know much about his past or who he really is, especially me since I really don’t remember the Millennium Falcon Arc all that well and that shit is where he shines (along with the rest of Femto’s new band of misfits). Still a cool vibe, I like him.

Locus - Pretty knight. Not much else to say. I like him. Kind of bland character, pretty sure he gets jealous for Femto at some point in the manga, but feint memories. Borderline D tier but I think he’s fine in C.

Rakshas - I love his character design and his desire to assassinate Femto. Most of Femto’s new followers are endlessly devoted to just that and happily serve him. They’re all his soldiers, but Rakshas is just there to kill the man. I love it. Pretty cool character, not much “character” though since these apostles have barely gotten any spotlight compared to the likes of other characters who have been the main focus for arcs.

Ganishka - An Apostle who actually opposes the God Hand and therefore fate itself, which is interesting. He’s also one hella powerful apostle with the ability to shoot fucking lightning. Borderline just unkillable for most if not any human. Guts only managed to harm him and that was with the help of Zodd. His desire for power consumed him and did turn him into a mindless monster that filled the lands with corpses and fire, but Femto dealt with him. I enjoy him, low B.

Grunbeld - I like this guy a lot. Recently even found out he has his own side story manga thing that I am 100% getting/buying/reading sometime. Had no idea it existed. As a character, I really like him. Another apostle to run into Guts and come out alive. Plus he’s a fucking dragon. Nothing to really dislike about him, he’s just cool as fuck. Common thing with apostles I guess, cool, pretty, or ugly.

The Count - One of the two apostles to have entire arcs dedicated to them, the other being Rosine. The Count has a solid backstory and is a typical sadistic demon. What makes him really stand out is that he still holds a piece of his humanity after becoming a demon, loving and cherishing his own daughter even more than his own, demonic, life. Truly something. Also kicked the shit out of Guts.

Rosine - My personal favorite apostle. A distraught girl from a ruined family, running after a fairy tail to seek salvation. The entire mini-arc of The Lost Children is fucking amazing to me and I second it to Golden Age (though I’d probably have to reconsider this after my in person re-read). She even pushed Guts pretty fucking hard, probably the hardest we’ve seen a single apostle push him through. Fire, stabbed in the face, falling from possibly hundreds of feet. Pretty sure Guts would have even lost if it weren’t for Puck. Just an amazing character.

Zodd - It’s mother fucking Zodd I don’t got to explain anything. Cool dude, has a life sized statue (I think). Seriously not gonna explain this, it’s fucking Zodd.

K so that’s my list for something no one asked for and certainly no one cares for. Thanks for reading this far, have a nice life and if you just skipped here go die.