Can we make stats titles...?

Now before you all go to the comments and say yes/no, i’ll want to explain at first. I think this would be a nice thing to grind for #1 title, for any stat that has the titles unlocked. Like for example, you could make a ‘#1 Chest grinder’, or a ‘#1 Spell Caster’. These are just side ideas for the game, so people don’t get bored while waiting for updates. Keeps them going, i guess.

I feel indifferent about this idea; it doesn’t seem really needed, but more obtainable titles would be nice

It would be cool but at the same time it would be kinda dumb for ones like #1 spell caster because you could just afk auto farm for those titles.

Afk farm? No way to afk spell casting. You have to constantly use spells, but it’s your opinion of course! I just have 15.5k spells atm, so i just added it. xD

Exactly, i feel like it isn’t needed, but could be a side goal for those who are waiting for the update.

Nice idea, but I don’t do that.

Lol, guess i should start grinding to get 100k ASAP. xD. 15k doesn’t seem like so much now.

Exactly what i thought, thanks for your opinion! 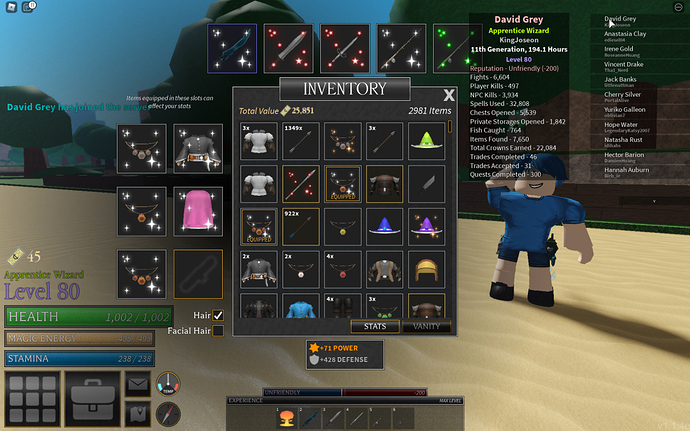