Game based on anime

this game is based off of the anime fairytale, right? A lot of stuff from it are similar, maker magic, the “aura” that magic makes when firing it, the words “Magic Council,” “Dark Wizard”, guilds, parties, “forbidden spells”

iml arcane adventures was based off one piece

what is fairy tail even about

Not sure about this game in particular, but its predecessor (Arcane Adventures) had a lot of similarities to the anime One Piece (from what I’ve heard. I’ve never watched it).

Vetex was making a fairy tail game realized it could relate to AA, and created WoM. 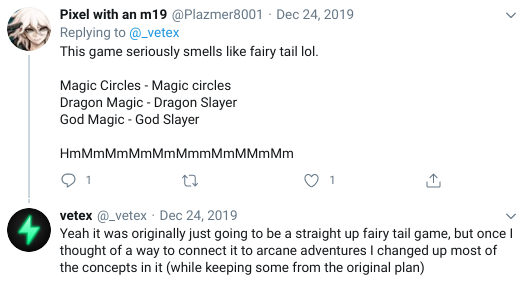 No. I hate fairy tail. Never talk about that shitty anime every again.

world of magic is fairy tail mixed with arcane adventures

arcane adventures was fairy tail mixed with primarily one piece

In a way, WoM is the most ambitious fairy tail spinoff conceived, to date

tbh both wom and AA used concepts from a lot of different games and animes, kind of mixed them together in a stirring pot, and that’s where we are now

hi welcome to forum,im glad im not the only who note this