i was thinking maybe a new wave/boss type of event that happens out in the sea would be a cool addition to Arcane Odyssey it would be challenging but very rewarding event and it would give us something else to do besides exploring islands.

It may seem like its too hard but with enough preparation and maybe some friends it wouldn’t be. Plus this is seem from afar so someone else is likely to show up.

First of all, I love this idea. Fighting a ghost armada with friends sounds fun as hell.

they can only be hit by cannonballs, any other type of attack will just pass through them

I feel like you should be able to hit ghost ships with magic. Maybe they won’t be bound to the same status effects as most boats, but magic should at the very least be able to damage ghost ships. MAYBE some weapon skills too.

Third, holy shit that is cool. If I could vote twice, then I would. 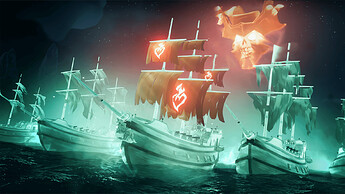 I feel like you should be able to hit ghost ships with magic. Maybe they won’t be bound to the same status effects as most boats, but magic should at the very least be able to damage ghost ships. MAYBE some weapon skills too.

I suggested only cannonballs because the ships would be weak in health since they would come in numbers like 5 cannonball shots would kill each ship depending on how fast you can shoot cannonballs maybe.

5 cannonball shots would kill each ship

…Yeah, that’s actually a lot since the only real ship announced so far is the sailboat, and that can only fit two cannons. You said that this was a server wide event yeah? So presumably the entire server -or at least most of it- would be fighting the horde. So I don’t really see the reason for the low health. Unless the armada is HUGE.

well i’d say it would be about 20-30 ghosts ships but only 3-5 attack at each wave but the other ships would remain roaming around so others player ships that approach would be attacked aswell and i said 5 if you could shoot cannonballs considerately fast otherwise it would be less if it was slower.

yeah, just let players use magic. It makes sense and it would give players an attack option while their cannons are reloading. Cannons in AA fired SUPER slowly.

it’ll all be up to what vetex does in the end.

Of course, Sea of Thieves.

SEE THIS IS A GOOD SUGGESTION, FINALLY SOMETHING THATS NOT ALONG THE LINES OF STINKY SHIT POOP AMOGUS LOST MAGIC PRIMORDIAL SUGgGESTION.

Man i did not expect this to get as many votes as it did! thanks everyone!

it indeed does sound neat

this would be absolutely lit, though magical attacks should work as well. That’s pretty much all I can say, maybe you can obtain a magical weapon too

Why waste your time writing this? Vetex will not accept this.