I can't believe myself 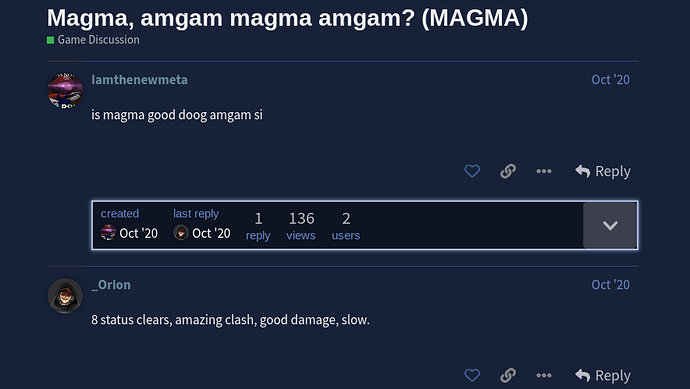 image884×499 42.2 KB
(for context, this is my EXTREMELY old alt account I forgot the password too, I think cryonical knows about it’s existence but eh that’s besides the point.)

I used magma back in the day…

Man of a Million Alts :troller:

I can’t believe I used the yuckiest magic ever

I used magma back in the day…

I used the yuckiest magic ever

@Divanochi, get down here right now.

Some people just can’t have sense talked into them, magma haters are part of those people

I used magma back in the day

An average day in the life of the Man of a Million Magics.

some are more appreciated than others…

some are more appreciated than others

What’s so wrong with magma anyways? What did it do to them? I haven’t used it much, but it seems pretty nice.

It is nice, he’s just extremely against it for some reason

It is nice, he’s just extremely against it for some reason

not just that, it’s one of his million magics too I don’t care! I hate magma and that’s that, and what’s wrong with crystal? it got buffed in AO and it’s easily the most visually pleasing magic.

You can hate me all you want, but I stand by my word that I hate magma, it’s just so dumb and acid is way easier to use.