NPCs in town should post their quests to a quest board. I, at times, have spent 30 minutes just trying to find a quest to do that is my level, and I’m sure many others here have. Adding a quest board where NPCs post their quests would eliminate this almost completely. Please see image for examples & pros and cons. 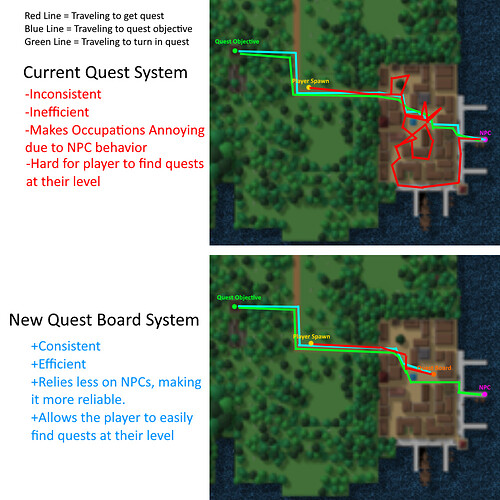 This is already half-planned with the guild halls going to be a source for quests but
Realistically, you wouldn’t pin on a notice board for the minor quests we usually do,
if you post about bandits, the bandits might move or attack or hurt someone,
you don’t publish a request to deliver mail to a specific person,
and people might look down on you if you lose your items often
The quests we currently get are just minor little errands, and not big requests which would go on a notice-board type system

edit: if you have difficulty finding quests, either serverhop or go to a different town

Tried going to different towns, Novice and Apprentice quests are just hard to find nowadays. Trouble finding them either way. Doesn’t help that the quests that are below you only give half of the original reward.

Handing a letter to a random stranger and saying “Hey I know nothing of you but give this to a random person in town you probably don’t even know” is just as unrealistic as a posting for delivering a letter. I’d argue that a posting saying “Hey if you’re heading to xyz can you take a letter there for me? I’ll pay you for the trouble” makes more sense than the current system. As for the bandits, the same could be said about posting wanted posters of someone, yet that happens all the time.

Not only that, but once your town reaches the night one of the only real people you can still get quests from is the Tavern owner, and that isn’t even a gurantee. There should be atleast still patrons that you can (hopefully) get quests from.

I kinda like the current system personally. It forces you to explore. And having the quest board later on also helps if you’re sick of running back and forth In places you’ve already explored to find a quest

I would agree that initially I thought that but the novelty wears off pretty quick.

Even if it forces you to explore, the fact that it’s incredibly tedious going around the map (which will get bigger and bigger considering that more cultures are being added and if you can see the map gui, it’s pretty huge) which makes the game incredibly grindy for my taste. You should’ve have to walk an hour across the map just to find Novice+ quest (Counting after the map is finished, but still prevelent).

Apprentice quests should have a good chance of showing up if you serverhop at the silent tower. That is if the NPC isnt glitched.

Gonna reiterate SchmidtyBits for a second. The fact that you gotta serverhop to get good quests basically means that the system is incredibly flawed. People shouldn’t have to do that all the time.

I believe some of the dialogue mentioned this but, some of the npcs giving out bandit quests say
“I can’t tell anyone but~”
“They said if I tell anyone they’ll beat me up”
And most of the wizards and mc giving out quests are just you doing their job for them, not something they’d want everyone to hear

If you have the gall to post a noticeboard to deliver mail to your neighbor, people will think you’re lazy

@Mithicon and yeah, I love the exploration aspect of it, definitely helps with immersion

I still think they’re lazy for asking me to take a letter to their neighbor. Also if immersion is what you’re after, server hopping is definitely not immersive. In fact it literally takes me out of the game. Just a thought.

Like the ones where they say “I can’t tell anyone” like as you mentioned shouldn’t be on the “Quest Board”, but should only be accessible to the NPCs directly. Though handing a letter to a random stranger thinking they will deliver it for you isn’t a great idea irl, maybe only have it if your reputation is high (because you’re more well known?) The bandit and dark wizard quests that aren’t secretive should be posted on the Quest Board and probably more, maybe add specific bounties to higher level npcs while you’re at it.

You’re just being a little unlucky, just go around and kill shit and whatnot, you’ll find plenty of quests, you don’t even need to serverhop. @SchmidtyBits
Not every town is going to be covered and slammed in quests

The entire point of this post is that luck should not play a part in me wanting to do a quest, especially considering they’re really the only thing to do right now.

Killing stuff gives a fair bit of xp aswell, along with a little bonus reward from quest givers. And yes, I agree that walking around would find you a few quests eventually.