really couldn’t have made this shorter huh

tl;dr’s are placed within each section so the post doesn’t suck as much to read

With the public Trello being given a plethora of new cards being added, Vetex expresses interest in once again adding Impact Fist into the game; albeit in a way dissimilar to its implementation in Arcane Adventures:

Why was Impact bad in the first place?
I want to better elaborate on my reasoning behind this idea by explaining what exactly went wrong with it back in AA/AR. As someone who was around when Impact Fist was originally implemented, I can say with absolute certainty that it absolutely sucked.

Legacy Impact Fist was unbalanced in the sense that you could charge it by mashing punch or kick for about five minutes, until you eventually had a miniature nuke atomically fused to your R key to instantly cheese whatever poor soul happened to rustle your jimmies. (~3,000 damage at level 200, why god)

It was also unengaging, both to the user and to others. Having to effectively “farm” the meter by basically doing nothing but pressing a button for a few minutes actively took you out of the action, and was equally as unfun to others when the fight just got immediately ended because the other person sacrificed half of their brain cells for a funny “fuck you, die” button.

As an attempted solution to this, I want to propose the idea of charging Impact’s meter by specifically using it to deal damage to enemies.

Lots of fighting games like Street Fighter or Guilty Gear (i think?) handle Super Meters in a very similar way. You deal damage to the enemy, and your super meter gets filled slowly over time. I thought a simpler application of this method would be best used for a style like Impact Fist, since… that’s what it does. You build the meter for a super move. That’s pretty much how it’s always worked.

I know you almost certainly have a couple concerns regarding an idea like this, and the reason I know that is because dear god, so do I.

Legacy Impact’s meter was bad both in it’s engagement and fun value.

Mashing a button is not engagement, especially if the exact manner of doing so effectively forces you out of combat. Tying meter gain to damage actively promotes usage specifically in combat, and weakening its’ normals means there is an active risk to trying to build meter too quickly, in the sense that you’re basically sacrificing the higher damage of your other tools (be it magic, weapons, etc.) for the potential of a larger reward later.

so tl;dr this is good and actually has a solidified role in combat whereas the original didn’t or something

That’s about it, really.

I don’t know how to conclude this.

really couldn’t have made this shorter huh

Make it so you charge the impact fist by damaging enemies using the Q move.

a funny “fuck you, die” button.

Couldn’t I just enter a fight with a player and run away to punch a couple NPCs to death and then immediately pocket nuke them?
Even with the drain, doing this would just not drain it because I don’t ever leave combat.

I’ve pvp’d in this game before (unwillingly) and I know just how desperate players are to chase you to the ends of the earth for that funny kill number.

Man we already know vetex isn’t gonna fuck up the same way he did 3 years ago.

Most ways to interpret the concept of impact fist is a fuck up.
This method might even be a fuck up based on what I just said.

I kinda liked old impact fist (spam Q for pocket nuke), but I didn’t take PvP very seriously in AA. I doubt it’s coming back, and this seems like a reasonable alternative.

Couldn’t I just enter a fight with a player and run away to punch a couple NPCs to death and then immediately pocket nuke them?

I don’t really see anything wrong with this scenario - don’t fight an impact fist player if they’ve just pumped themself up fighting NPCs. If you stop fighting a player to go charge your impact fist against NPCs, you’re either going to:

Impact fist shouldn’t be like AA at all in my opinion. If I were vetex, I’d make impact fist charge at maximum of 5 and then release it in a shockwave or something, so it can actively be used during combat instead of just charging it outside and one shotting some poor fella with it

I don’t really see anything wrong with this scenario - don’t fight an impact fist player if they’ve just pumped themself up fighting NPCs. If you stop fighting a player to go charge your impact fist, you’re either going to:

You see, I wouldn’t use impact fist to hunt targets, I’d use it defensively.
If I lose the ‘target’ then good. If I manage to charge myself up and pocket nuke the guy chasing me to get them off my back, even better.

Again, fine by me. RKers shouldn’t pick fights with impact fist players who’ve got easy targets nearby to pump themselves up against.

Except impact fist would work anywhere on the map, imagine a guild leader impact fist

This is a very well thought out idea. Take the vote.

AO will probably have far fewer NPCs. Between 90% of the map being water, and no more random spawns, there’s going to be far more places where the nearest NPC is an impractically long walk away.

Not to mention my first point: “oh no I’m under attack, time to go punch some NPC that’s standing still on the ground” is a really bad survival strategy. Your opponent will just blast you, or run away, depending on if they want to fight or not.
A guild leader with reworked impact fist wouldn’t be a threat at all. You could just walk away.

Obviously you’d want to stay well clear of an impact user who’s just beat up some NPCs, but just like Ice users in the rain, it’s not something they can proactively hunt you with.

So if someone starts fighting NPCs, they should just become invulnerable to other players?

“Invulnerable” is a strong word.
I wouldn’t say an Ice user is invulnerable the moment it starts raining - I just wouldn’t want to fight them if I could avoid it.

take into consideration that there was NO BLOCKING in AA and AR. imma pefect block it every time easy .

If you are fighting someone else, they have a fully charged impact fist, and they know how to play the game, you’re dead. 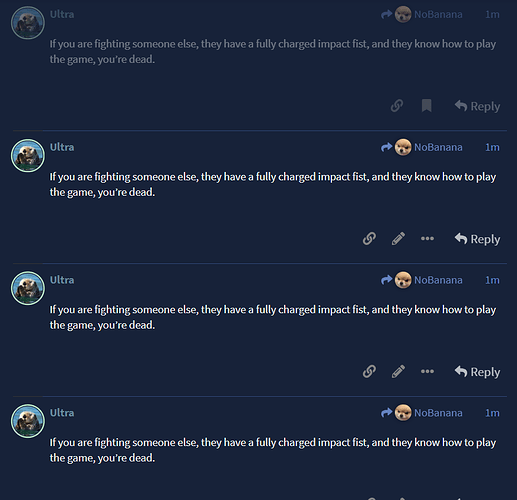 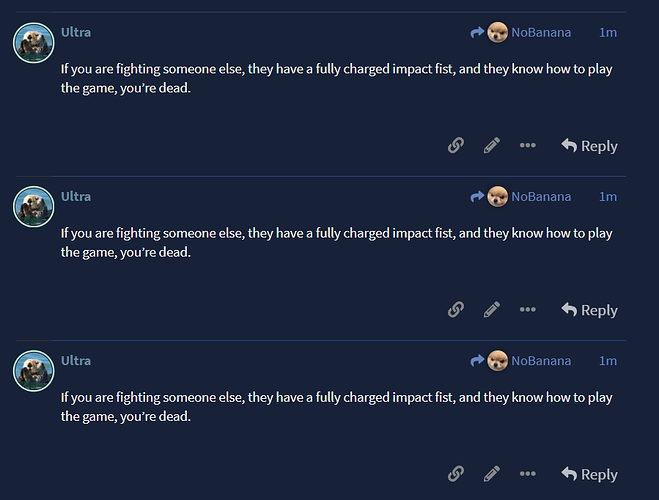