Legacy Part 10 Chapter 20 Episode 1 Apocalypse The Frost Demons lunge at the trio with every intention to kill. Aaron leads the charge, immediately using a placed explosion to knock them back. “Aria!” She complies, stepping back and launching...

Some general patterns I noticed:

Firstly, you often drop out of a character’s perspective.

image812×359 48.4 KB
While this is fine sometimes (like the above example), it can become confusing at other times. The first part of the paragraph:

Fuyuki finishes his current fight and returns to Aaron. They look at eachother and nod, and decide to test out the strategy they discussed a day ago. Fuyuki charges his energy, and unleashes his own speed mode spell. He runs around the canyon, unleashing all the blasts he can muster, attempting to freeze them all.

is pretty much from Fuyuki’s perspective. But the following sentence:

Aria watches in awe as a portion of the frost demons lay frozen.

is from Aria’s perspective, and the rest of the paragraph is from Aaron’s perspective. Preferably, you want the perspective to be the same until you reach the next section break (episode). This keeps things simple and makes it clearer. It also allows you to write stronger emotions and build them up over time.

Second, the fight scenes all play out like a video game. The bad guys rush in stupidly, the main characters blow them all up with AoE attacks, and nothing has any real significance. You could literally have removed all but the leaders of the groups and it would make plenty of sense.

The bad guys also talk too much.

Literally if the bad guys were trying to help the heroes win, they could not have done it better.

The problem with making such simple combat with perfectly executed plans is that nothing has any emotional impact. Every fight is dealt with easily and cleanly. The few near-death incidents are brushed off ten seconds later. The reader is not invested in the story, because the characters deal with everything easily.

My third point is related to the second one: you use bad diction. Your choice of diction sets a tone of ease and logic, but it’s a fight. You don’t want ease and logic.
Words like “deduce”, “necessary”, “seems”, “think”, “effortlessly”, “strategy”, they all serve to contribute to the general tone of “heroes beat up bad guys easily”.
You also repeat some words a lot 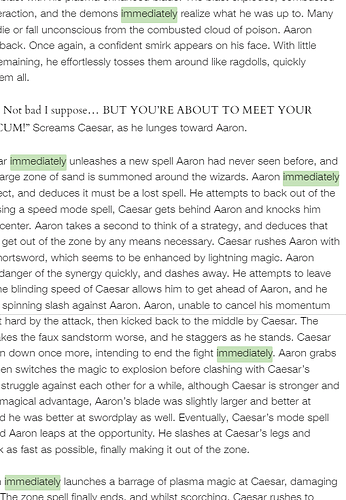 Fourth, there are numerous grammatical mistakes. These are not important and could be corrected fairly easily enough.

Returning to the first paragraph I screenshotted, I will now revise it to how it might look if you corrected most of these various things.

Fuyuki finishes his current fight and returns to Aaron. They look at eachother and nod, and decide to test out the strategy they discussed a day ago. Fuyuki charges his energy, and unleashes his own speed mode spell. He runs around the canyon, unleashing all the blasts he can muster, attempting to freeze them all. Aria watches in awe as a portion of the frost demons lay frozen. When Fuyuki’s mode spell runs out, Aaron has already activated a power mode spell. He charges his magic energy, and recalls his experiences. Multiple huge magic circles flare awake from his outstretched hands. He remembers his master’s last attack, and for a second, wears a sad look on his face. Upon realizing the irony, he chuckles, before returning his gaze to the battlefield, with a smirk. Before unleashing his most powerful attack, he thinks to himself:

Fuyuki blasts the last of the demons nearby with a heavy bolt of water. He glances back at Aaron, who nods in response. Fuyuki takes a deep breath, trying to calm himself. The noise of the battle fades away into the background as he charges his energy.
“Whitewater,” he says unleashing the spell. The world seems to slow down as the energy ripples through him, and when he moves, everything around him seems frozen. The first of the frost demons appears before him, and he watches with an odd sense of amusement as their eyes try to follow his blinding speed. He lunges into their midst and fires off a self explosion, freezing them.
The next group moves slowly as he flashes towards them, a barrage already forming in his hands. He ducks under a sword and fires, sending blast after blast through the frost demons. He stops and turns, ready to attack the third group, but his mode is already fading. The others seem to be speeding up, but his targets are right in front of him…
Remember the plan! With newfound certainty, Fuyuki leaps out of the way with the last burst of energy. It’s all in your hands now, Aaron, is his last thought before a blast of Fire Magic forces him to hide behind a rock.

(here we have a section break, maybe a new episode or something)

Aaron watches as Fuyuki rips through the frost demons. He grins fiercely at his friend’s success, before closing his eyes. He can feel it, the magic that rests within him, and he gathers it up, sending it swirling through his veins, echoing through his body until it climaxes in a roaring power mode. Yet he still doesn’t open his eyes.
He thinks back, back to the time he spent with his master. Their final moments together. The final battle. That final spell. He can almost see it, the letters in brilliant aquamarine, written across his mind as clearly as if they had been engraved there. Hydro Breaker. And in his mind, the letters begin to rearrange themselves. Slowly, they reform into something different. Something new. He smiles sadly. Watch this one, Master Lorenzo. He takes a deep breath.

Although this is obviously at least partially in my style, not yours, I hope it shows how you could improve. I corrected one or two minor grammatical mistakes, replaced the single paragraph with two separate ones in different perspectives, and made the fight slightly more in-depth, where instead of freezing half the bandits in a single sentence, I describe what Fuyuki does, and more importantly, how he feels.

I also do my best to put more emotion into Aaron’s thoughts and actions.

A good rule of thumb is to try to describe, not tell, what happens. Rather than saying “Aaron casts a power mode spell”, you want to describe him doing it.

Well that’s about it (for now). Remember, criticism a) only happens when you’re good enough to be criticized and b) you don’t have to use all of it, these are just my thoughts.

Great effort on the writing, it must’ve taken you awhile.