So apparently light got a synergy with crystal, is this true? And if it is i wonder how its gonna change the tier of it.

that’s right, it does 25% more damage when someone is crystalized. that’s pretty huge. it also got a +0.1 speed affinity buff, which makes it 18% faster than lightning instead of 12.5%. with these two buffs combined and second magics coming in ao, light might be crazy

I wouldn’t say crazy. Lightning/Water still does more damage. Lightning is only a bit slower than light and water is significantly faster than crystal.

However, light/crystal will definitely become viable.

sure, but remember that most heat magics and wind can get rid of soaked by charging.
i’m not sure if the same applies to these magics though, it probably does 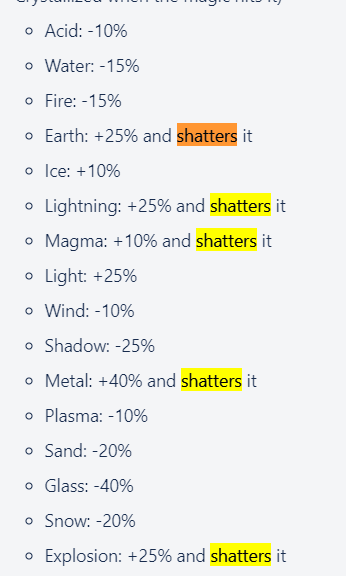 True. Soaked has 9 clears and crystalized seems to have 5. Also, the magics that clear soaked are some of the most common. However, I think water’s superior speed will make Lightning/Water a better synergy.

Nice. Finally light is able to synergize with another magic type. Guess crystal will be my second magic!

It will still be shit in pvp though. Unless its a 2v2 with a synergy.

Anyone who uses light or crystal without synergy dumb skill issue