image1112×275 45.8 KB
If you did that would you then become immune to magic damage until you recharge?

image724×104 7.71 KB
and does this actually increase your magic energy and could you get the same effect just by having a lot of it the normal way?

I’m gonna take some shots in the dark, but they kinda make sense to me so they might be close to the truth.

Maybe you can’t get to 0 magic energy, no matter how hard you try.
There could be some baseline amount you need to even create a magic circle. You can get bellow it, but then you won’t be able to cast any more magic to go lower.
And then, magic energy that is all around you could try to fill out your body when it gets low on it, kinda like osmosis, so the lower you go the quicker you get to the baseline, and since lore wise energy recharges passively you can quickly get back to cast a simple spell, but need some time to recover to full strength.

The sensing part I have no ideas about.

And for the last part, I’m pretty sure really powerful magic users have some sort of aura around them, the lost spell in question might be the exact technique that is needed to alter your aura to be damaging to those around you.
Instead of having a permanently damaging aura round you, you create one while there is an influx of energy into you, allowing you to sustain the really strong aura that is needed to make it harmful.

This is kinda reinforced by the plans to have a message appear when an extremely powerful wizard is close by saying “you feel an immense magic energy source nearby”, so if you’re a lot more powerful that someone else you can damage them with your aura, but if you artificially boost your aura while charging you can damage everone without being exponentialy strknge that them.

Does this make sense? I have no idea but it does to me for now.

Thanks for curing my writer’s block.

this makes sense and is basically what I said. It’s probably that you have to have magic n your body at all times, no matter what.

A lot of this might be a restatement of what UvadinVeliki said, but I guess having 2 perspectives isn’t bad lol

For the first point, I’ve always liked the idea of a mana core from the AA webcomic. I dunno if it’s canon to the lore, but basically your magic is drawn from your mana core. I’d assume that after you’ve drawn out all the magic you can from it, you’d be fine like Vetex said, just unable to get anymore out of it. But your mana core is still probably magic energy, so other magic can still react with it and harm you. Again, I don’t think mana cores are canon, unless someone can find otherwise.

On the second point, I do believe that it would become difficult to sense someone who has used up their magic energy. But if we go back to the mana core, there’d still be something there to sense, it would just be very faint.

And the last point I feel like UvadinVeliki put it pretty well, it’s probably just an altered aura that is destructive. Maybe it allows you to output more magic energy than normal?

I don’t think that you would reach some point where you can’t use any more magic energy but you still have some left in your body. Even if you can’t make magic circles you could use arcanium to make magic in smaller increments and plus there’s these things that tech said 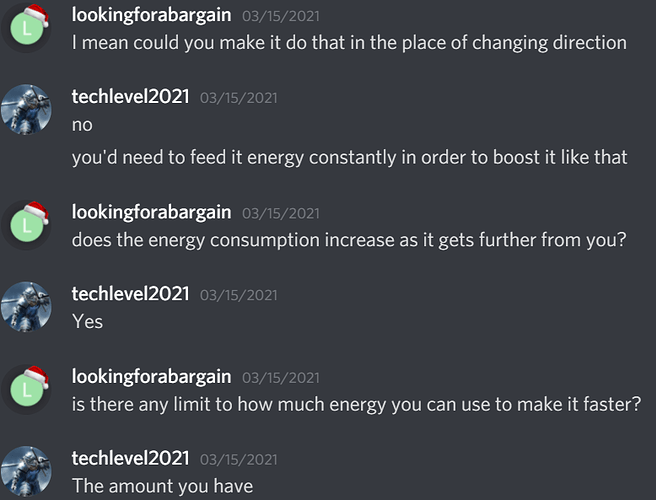 I was thinking more along the lines of you can’t get to zero magic energy in practice.
Like how absolute zero and perfect vacuum are theoretically possible, but you’ll never make them because absolutely everything is working against you.

@lookingforabargain maybe you can always use magic, but I was trying to look at it in a sort of realistic physics-ish way, which might be stupid for things like magic, but I still did it.
If I were to re state it, it’s not that you can’t get to 0 theoretically, but practically.

Like trying to create a prefect vacuum or reaching absolute zero temperature, as you approach your goal of 0, the opposing forces approach infinity.

And then, magic energy that is all around you could try to fill out your body when it gets low on it, kinda like osmosis

but filling your body with magic energy from around you is something you have control of. It’s charging and the rate of it seems to be a percentage of how much you can hold instead of how little magic energy you have because otherwise, given what tech said, you could make your blasts approach infinite speed. Maybe just respiration gives you magic energy like sleeping and eating do. I think your explanation works in terms of interpreting what they said as meaning it’s theoretically possible but not actually feasible for people to do

yeah pretty much. Not sure why you responded lol

also if it works like osmosis, then theoretically if you charge your mana bar to 100%, your mana should automatically start leaking out because the concentration of magic energy inside you is more than it is outside, if i remember science correctly.

so normally, mana bars should be like they are in Rogue Lineage in WoM except instead of the bar depleting completely, it should rest at a certain point. the more magic energy capacity you have, the larger your base amount of magic energy would be, because if one can compare magic capacity to a canister, a bigger canister means that more “stuff” is necessary to acquire an equal concentration than in a smaller canister.

the fact that they aren’t is either just a feature of the game or an actual representation of how magic energy storage works. if it’s the latter, then idk i think it’d be highly unlikely that you couldn’t just remove all the mana from your body.

If you did that would you then become immune to magic damage until you recharge?

? What, he said that your body won’t be affected as in nothing will happen if you use it up normally, if you release all your magic energy in one attack though you can actually break your mind and accidentally kill yourself

One attack doesn’t mean you use it up all at the same time. As tech said, you can feed magic energy to your blasts constantly even while you’re not touching them

Yes but YOU CAN put all your energy into one attack (lore wise not ingame) and cause your mind to either break, heavily exhaust you, or kill you

Okay. I guess that kind of fits with what I know but what it does have to do with this?

I’m trying to Sum up how using magic energy works