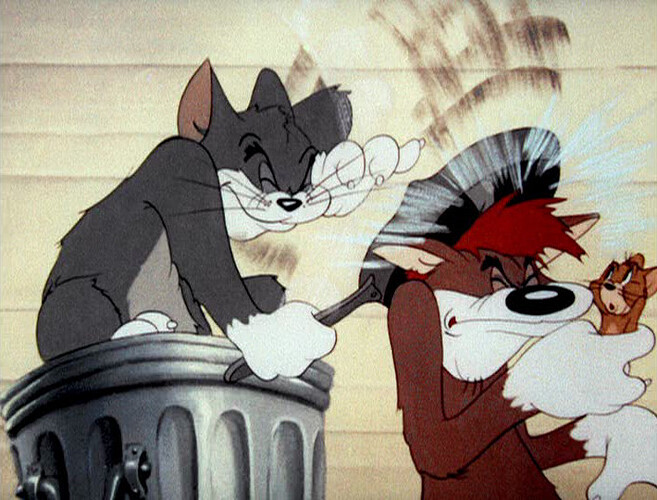 Big mf ball of metal the size of your player vs jimmy putting his hands up. seriously though it’s alr hard to hit because of its speed, at least let the dmg feel worth it. This wouldn’t apply to explosions or beams, would be for blast attack only considering it’s the hardest to land for metal magic.
The block break itself can either be a simple damage piece that ignores block or a short hit stun like wind. Either would work and would make metal magic more viable overall.

Metal magic has a bad cast time and projectile speed, with very situational synergies. let’s be real 90% of people can avoid a metal magic blast and the ones that don’t will just block. giving it a block break will give it a greater edge in cqc as it should considering it’s useless in any form of range combat.

Yeah, i like that idea, even if Metal magic deals a lot of damage, it’s no use if it’s easily avoidable or you can just block it easily and nullify most of the damage easily, it makes it just an obvious projectile that you can block with ease, so it breaking blocks would be good, Maybe a block break with a very short stun or silenced status effect.

Metal magic has high impact damage and the bleed status. Well maybe not but that’s what iron and gold have atm.

How to create a meta magic 101:
Make it so you can’t take any defensive measures against it.

Metal users already fight very close ranged, imagine being unable to dodge them because of how close they are AND unable to block them

all it has is raw dmg, the suggestion is to give it an edge in cqc. It’s not hard to avoid/block metal magics rn. this would just give it the edge it needs, Ice and earth are only outclassed by metal in raw dmg, they are faster and have much more useful synergies that are less situational.

They have to fight cqc that’s the only viable playstyle for it, and even still the slow cast speed lets people avoid it casually

The casting speed problem is almost only for placed explosions, the rest is basically the same

As a metal user, I disagree with this. This suggestion is the same thing as making everyone who fighs metal users sign their own death wish.

Not to be too harsh, but this sounds like a terrible idea. This makes the magic overpowered and more like a lost or primordial magic. Each magic is kinda like a different playstyle. Wanna be able to deal massive dmg up close and have your blasts hit quickly from afar? Get metal and light. Wanna be able to freeze your opponents? Get water and ice.

That’s the whole point. If it was fast it would be way too op. There has to be away to balance these things. It is only just a starter magic anyway and you have 3 choices to chose from. If you want something fast, switch to a faster magic which has moderate dmg

Ngl, this would basically make Diamond magic users impossible to fight against in the future, if this was actually implemented

Metal has the most damage in-game plus great dps up close. It doesn’t need anything extra to make it absolutely busted.

since ya’ll don’t get the point, i’m saying metal magic is p much made for cqc combat, it’s ok med range ( even then it can get countered very easily), and non existent in long range. You SHOULD be at a disadvantage fight it in cqc, considering it’s the only range it’s viable in. there’s no point in its raw damage if other solid magics do a similar job with much better synergies capabilities and speed. blocks nullify majority of the damage, block break would create risk and even then metal magic is still an easy magic to avoid.

Again this effect would not be applied self explosions, placed explosions, or beams. it would only be for the blast attack.

Low Speed is literally its only negative…

situational synergies and that fact that every other solid magic can do its job fast with much better synergies, and the same dot? ya’ll will complain about how every magic is the same and then want every magic to stay the same

eh, this one just seems to be too good at everything to really make that point imo

situational synergies and that fact that every other solid magic can do its job fast with much better synergies, and the same dot? ya’ll will complain about how every magic is the same and then want every magic to stay the same

I literally just gave you its stats, not synergies…
Also the DoT isn’t the same, Metal’s DoT does the 3rd highest DPS specifically

they’re all solid magic that can self synergy, matching metal magics dmg. the only good thing about metal magic is raw dmg, clashing rarely occurs considering this games pvp is reaction based ( meaning most will only counterattack after the other person attacks)