This is just my reasoning about how exactly clan battles will look like (Sorry if something is not clear, a translator was used to write the text)

First, we need to discuss the weapons that will be added to the AO:

All hybrids were taken from Trello 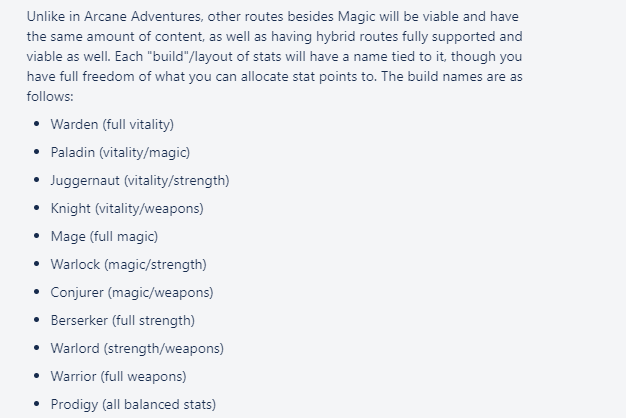 The world consists of islands scattered across the sea. The battles will most likely take place in the sea space. The sea has a very large number of parameters that can affect the battle (Wind, weather, sometimes fog, sea hazards). After the release, AO will add the ability to capture islands (Or it will be added to the list of things to do before the release).

And now let’s imagine how exactly sea battles, island sieges and their defense will take place.

Naval battles
Imagine that 2 powerful guilds entered the battle (For example, SunCry and any other large guild from LB). Each guild has 8 ships. The wind blows perpendicular, towards the dark sea. The weather is clear, but the whirlpools are present. Let’s say SunCry has already managed to come up with tactics for conducting sea combat and have some experience, while the other guild does not have any experience or tactics. Based on my tactics SunCry will do the following:

To gain an advantage, you need to attack perpendicular to the enemy, when the enemy swims in a straight line towards the SunCry guns. From this it follows that it is necessary to immediately turn in the direction of the wind and at the same time attack the opponents. Of course, some of the cores will fly by, but due to damage, the enemy ships will slow down a little, which will give an advantage. After a successful attack, in order not to lose speed, you need to move back diagonally, in the direction of the wind. After that, we must go in the direction opposite to the wind to turn our trick again. If the opponents realize that you are going to attack them again, then you need to turn the ship 180 degrees (or 360) and attack again (When attacking, the enemy usually turns sideways, but when turning, they will think that the ships are sailing away and will swim straight and swim closer, so you can hit your opponent with a high probability, but when performing the trick, do not forget about the distance because it should be such that the enemy could not reach you after turning sideways). Now the enemy has already learned our tactics and will not fall for our trick, so we need to quickly change tactics. After a successful attack, we need to bring the enemy to the whirlpool. However, in order for the enemy to be close enough to the maelstrom initially, you need to go around it, splitting up and connecting again, swimming the maelstrom close enough, after that the enemy will follow your example so as not to fall behind, and then we surround it so that it floats in its area of action. After that, we swim in a circle, sometimes narrowing the circle (When the enemy will attack the ship, the captain must turn in his direction, if he can not attack for some reason, it is necessary to turn perpendicular to the enemy’s guns, so that the least number of shells hit). If your ship is badly damaged and can sink after a while, then you need to use a weapon focused on the player’s attack and use it against the player whose ship you will take on board. After that, you need to go to the ram and try to capture the player’s ship (Because of the damage, it will be easier for you to deal with it). Before re-boarding, make sure that you have fully recovered your health. If there is no opportunity to board, then it is better to sail away and try to repair your ship. And yes, do not let the enemy with a damaged ship take you on board.

Capture of the island
Let’s assume that the teams of defenders and attackers are equal (8 people). The defending team has placed cannons on all flanks to destroy ships and players. The attacking team must follow the following plan:

There should be 4 people on each ship. There will be 2 ships. They must attack from one flank. In order for people to land on an island surrounded by walls, it is necessary to destroy them with them. Probably the enemy has put 8 cannons on each side, so if you attack them from one flank, they will fire all 8 cannons, which will lead to the fact that the opponents will gather in one place. After breaking the wall, you need to send the 4 most resilient players to the island, which will distract the defenders and take them to another part of the island, after which the players with the highest damage will be able to safely get to the island will fight. And here the tactics of ground combat are used: Juggernauts stun opponents, Paladins heal allies, Wanders protect weakened players, the rest try to deal the highest damage (Preferably using attacks with a large AOE)

Island protection
I can’t say much about the island defense, because I don’t really know what the island editor will look like, but I can only say one thing: Don’t let the enemy get on the island

Warden
This is a classic tank that will have a large amount of health and will use shields as weapons. He can act as a fighter who will stun opponents with melee attacks and deal small damage, or as a defender who will impose defensive buffs on allies

I appreciate the effort you put into this, but in reality it’s just going to be a bunch of Conjurers, Warlocks, and Mages duking it out on AO’s equivalent of Judgement Isle. With the way region capturing has been described, there’s really no reason to fight for an island, since there’s more than enough for everyone, and you can only capture one at a time.

If they do it like in AO, then yes, it doesn’t make much sense, but vetex can do it differently. In order for the capture of the islands to be more interesting, we need to complicate the process of capturing them. In my mind, a good island capture system looks like this:

That’s why a player can’t capture more than one wild island, but players ’ islands can be captured once an hour. Most of the low-value islands must be located in the dark sea, so that the trip to them is quite difficult. High-value islands are located within the normal seas, so that when the player spawns, you appear in the normal sea, and not deep in the dark sea. The most valuable islands are located very far away in the dark sea and serve as a gateway to the guild house (Guild members can easily find themselves in the guild house by simply pressing a certain button, while the enemy has to search for this island somewhere in the dark sea for a very long time). All islands can be armed with automatic cannons and harpoons, which will defend the island without the participation of players (These will be NPCs that automatically fire guns at the sight of a hostile player. They will deal less damage than normal guns and have a margin of error in their shots). Also on the island can be located barracks in the wars, which will also protect the island. They will have the highest level available at the moment for players, for example, now it is level 90. They will also use an extensive pool of abilities depending on their type, in order to resemble the actions of the players. The number of cannons and barracks depends on the size of the island. To capture an ordinary island, you need to destroy all the cannons and barracks with wars. To capture a valuable island, you need to wait another 2 minutes. And yes, anyone from the guild can teleport to the island once and interrupt the process of capturing the island (A maximum of 10 people can teleport). To capture the most valuable islands, even in the wild state, you will have to put a lot of effort because such islands are simply strewn with improved guns and barracks, which makes capturing the island a very difficult task, given that after death you appear on the islands in an ordinary sea and you have to go very long in order to try to capture the island again. Captured islands of this type cannot be captured again, but a guild can only capture one such island. After the capture, the island disappears from the map and appears on a separate guild server and is a clan house on which you can develop it as you like (The most valuable island is about the size of a large city by AO standards). For capturing an ordinary island, 1 infamy is given, for capturing a valuable island, 5 infamy is given for each day of holding the island, for capturing the most valuable island, infamy is not given, but only after that you can teleport between the valuable islands of the guild

The Great Wall of Text

Is this just your concept, or what? Vetex has said none of this, and I doubt he wants to code all of this. Also, there won’t be capturable islands in the Dark Sea. There literally can’t be. They’re instanced and randomly generated.

man sorry if this comes off as rude, and i’m still gonna read your comment, but please use spacebar.

While I plan on being a magic + blank sort of thing, a weapons + fighting style build sounds it will have a bunch of movement from all the moves, and ooo boy, that sounds really fun and a nice way to piss off all the slow magic users

except i will be there and kill all of them

Ofc ofc, but most fighting will probably be around the central PvP island/hub area.

here is the short story, we are going to disband because of creed

depends on how many members they have

yeah yeah thats pretty much it. Hades greened deviable a little while back