hi hi
so as you probably already know, vetex added a ton of stuff from his “private trello” so he could get feedback or whatever 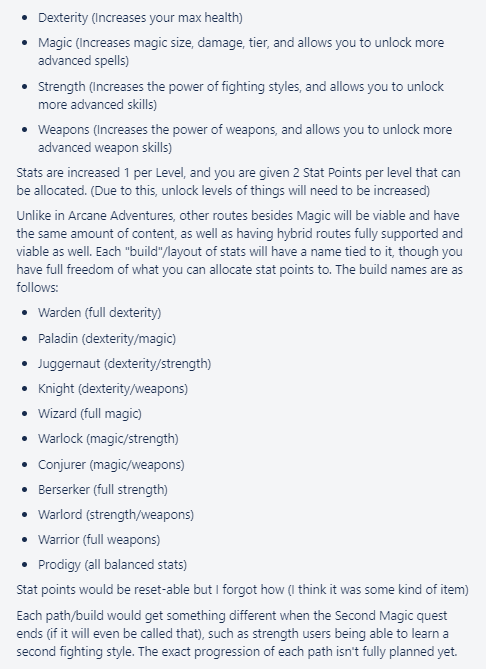 proposal:
don’t do whats currently written it sucks
at the least revamp the current idea heavily

frankly, as currently written, the whole stat point idea is detrimental if anything

just do what was in arcane adventures again

just do what was in arcane adventures again

This had to be my least favorite part of AA. Everything at the time was fantastic but having to spam for hours to be able to pvp with good damage was such a pain. It’s a sequel. There’s gonna be change.

AA was a thinly veiled simulator by today’s standards, but earning levels for the equipment you use isn’t a bad system.

No please, I like the system as of now currently. It will have it’s own paths and things unlike those other games, and will be more unique.

Bruh half of these points are you over-worrying or just being scared about something because you THINK you know how its gonna be. Jesus.

the relevancy of stat points may completely differ;
at the beginning of the game, players have slim access to fighting styles or weapons viable in comparison to magic (which I assume will still be somewhat true in AO) .

Not true at all, you literally spawn with a fighting style and magic, and one of the first quests gives you a dagger.

while one could theoretically “reset” their stats later, this could lead to confusion admist unviable sets or poor placement of stats, potentially causing new players to quit the game

rare weapons, drops, etc, are completely scuffed by these types of allotments;
what if, for instance, a pure warrior obtains a rare magic staff or scroll or vice versa?
those rare/higher tiered items/boss drops or whatever may be completely unviable due to a build.

Then… just trade them for stuff you need? If you’re a full weapon build and get a lost scroll, trade it for a good weapon. Common sense.

while all these “builds” sound cool and stuff, they’re just cool sounding names.
“Each path/build would get something different when the Second Magic quest ends (if it will even be called that), such as strength users being able to learn a second fighting style. The exact progression of each path isn’t fully planned yet.”
but what about the stat resets?
what if a player proportionately starts investing more into a different “class”?

The names are just that, names. They aren’t set paths that you choose, it literally just detects what your stats are and displays one of those names as your “build”. You can allocate any amount of points to whatever you want

expanding on above, if the classes get specific massive buffs then certain classes are gonna be meta just for those reasons.
for instance, if you get two fighting styles, you’d be able to use radius as well as impact fist (they’re in the trello now) at the same time, which potentially could be far stronger than simply another base magic.

Irrelevant point, this could be brought up for AA as well if its strength path was more developed. Obviously this would be fixed with just balancing the game, not a valid point.

Irrelevant point, you still need to level up in order to gain stat points, which requires grinding in some way. In AA it was the exact same, just that you used whatever you wanted to level.

stat points aren’t specific from how you get levels
if I blast all my enemies away with magic, while putting no points into magic and everything into weapons, then the player being the strongest with weapons without any actual effort put into using weapons is just lame

Valid point, but I prefer skill point system over leveling each stat, so thats what its going to be

the actual “stat reset”, how do you get it?? do you spend robux? do you need an in-game item? how much do those items cost proportionately?
if the answer is robux, then its shitty
if its not robux, then is it an in-game item or service?
if yes, it’d have to be obtainable relatively easily early game or you’d likely lose players.
if free, whats the fucking point

Having the stat reset item be common isn’t going to mean the difference between the game being alive or dead, dude… jesus. It’s going to be a relatively rare item.

overspecialization;
lets say someone puts every single stat into magic, then you add a full set of magic damage boosting armor, and then add players using metal magic or lost/primordials to inflict maximum damages
you’d see these overspecialized players in practically every stat category, some prodigy or balanced player would get blown out of the water by these glass cannons or in the case of dexterity, tanks.

Not true due to how the hybrid paths will work

no real lore to this, breaks immersion if you wanna be fr

Its a game… obviously gameplay > immersion

yet another irrelevant point

All of these proposals are worse than whats planned, no thanks