okay but can he create a triangle who’s sides don’t add up to 180 degrees?

(or, maybe, a prison not even he can escape?)

if so, they aren’t omnipotent (lol!)

omnipotence is an idea humans created which doesn’t exist. Under the criteria it is impossible for anything to have omnipotence.

no he couldn’t. he created triangles to have 180* and thats how they are. but maybe?

omnipotence is an idea humans created which doesn’t exist

I forgot about that from yesterday.

forgot about that from yesterday

your point? You’ve already proven that nothing is truly omnipotent by your standards.

You’ve already proven that nothing is truly omnipotent by your standards.

also wdym by my standards

and I can’t take back what I said? Change my opinions? Learn!?

I also replied first to your post about why God was omnipotent explaining why God wasn’t omnipotent, to which you replied that omnipotence itself was stupid.

Me: “please let this be a normal argument…”

Literally everyone else: “WITH THE NERD? NO WAY!!”

please let this be a normal argument…”

Literally everyone else: “WITH THE NERD? NO WAY!!” 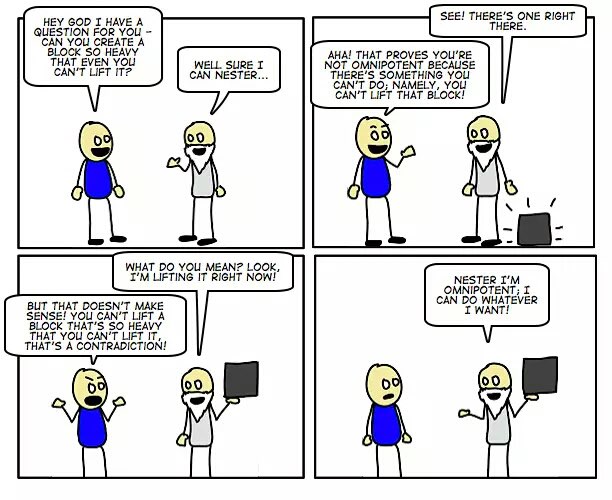 omnipotence is such a stupid ability I swear

fact he created a rock that was unliftable by him anyway actually would mean he’s not omnipotent.

How does it make him not omnipotent?

because he can’t lift the rock.

omnipotent beings are supposed to do everything

and if he can’t lift a stone, that’s not everything.

and for the people who are like “oh well he can just defy logic and lift it anyways durrrr” that means he cannot make a stone he can’t lift in the first place, making him not omnipotent either.

How does it make him not omnipotent?