Defense should be a seperate part of your main hp like below. 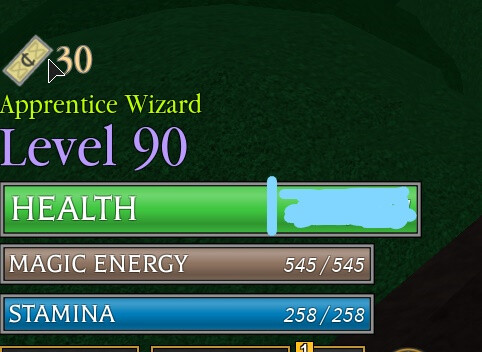 This would be nice though. Screw the dumb hard wizard meta.

I use powerful wizard robes instead of hard, does that make me cool?

I don’t see this actually changing much except making people run a few more power enchants instead of hard, but it’s a good change anyway.
Health regen could absolutely get out of control in future with high level defense gear, and establishing a tuning mechanic like this lets us balance defense properly without having to deal with the threat of immortal defense builds.

it was gonna be like this in AA before it broke, good idea.

I run a dual defense-power loadout and I sponsor this message.

Yeah, I want this.

This doesn’t make it not a meta stat in the future but it definetely won’t be the only thing being used and it can be nerfed later if needed since its not really going places.

It really depends on how the other stats scale.
+100% is still miles ahead of the other stats, so we’re definitely not seeing any meta changes any time soon, even with this change. The other stats are struggling to scrape +50% - casting speed is sitting at a pathetic +23%.

The other stats have the advantage that they’re actually scaling relative to our level though - power and defense will always be “about 2x for a full build”, but percentage stats aren’t as sensible and they range from 1.05x to 5x depending on what level you’re at. Extrapolating our straight(ish) line we see percentage stats taking over at level 250, though they’ll probably have to be changed at some point.
The formula either flattens (making mixed builds OP), continues going straight (making the percentage stats stupid 5x multipliers), or does some other nonsense (making it clear vetex doesn’t know what he’s doing).

If I had to guess, we’re going to continue to see all the stats adjusted every update to try patch over the issues caused by all the scaling being completely different. We’ll never plan more than 20 levels ahead, and the pre-cap meta is always going to be “every stat is worthless except this one”.

I wouldn’t try estimating the log formula for percentage based stats till we actually get the formula which I wish Vetex just gave, idk why it isn’t already released.

actually, you gave me an excellent idea
Hold on a minute

I wouldn’t try estimating the log formula for percentage based stats till we actually get the formula which I wish Vetex just gave, idk why it isn’t already released.

too late for that, I’m hours down that rabbit hole

It’s clear that there is scaling (if you look at a graph of increase per agility against agility, there’s an obvious curve - the actual effect of 1 agility is almost identical to 2 agility), but the issue is that it only really applies for the first dozen points. By the time you’re looking at 50 agility, there’s almost no difference - it’s effectively linear from that point onwards. 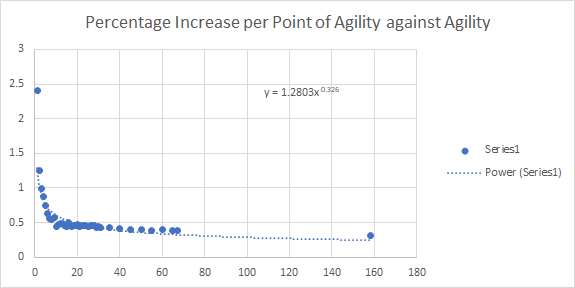 This doesn’t match a log profile - it curves off way too fast. If you try to fit a log curve to it, you get something like this: 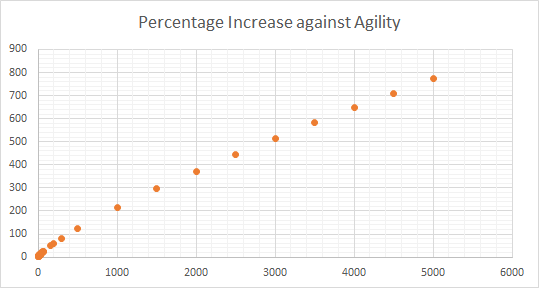