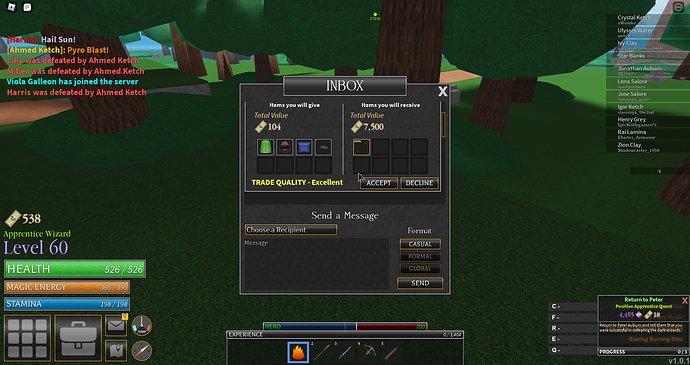 You should accept that, smoke arrows are becoming the new currency

meh, too late, and its useless in fighting npcs

But smoke arrows are a 1:1 ratio of item to money, meaning it’s basically crowns but they don’t have a cap

I mean smoke arrows useful in trading, but for pvp purposes not really. I suggest you save it, the community is making economy just b/c of those smoke arrows

Something interesting is that if smoke arrows lose selling value people might still use them as currency for trades, because the community might still treat it as a trading currency even if you can’t sell it.

i usually use smoke arrows for escaping from players, for example there was one time i was running away and used smoke arrows and took a 90 degree turn and hid myself on a tree

If it lost value for selling then it would lose it for trading as well since the only reason it’s used as a proxy money is because it can be sold for one crown. Without it smoke arrows loses it’s value.

Well then what will be the trade currency? Smoke arrows is the easiest thing, and if everyone keeps using it for a trade currency, then it WILL have value, it will have value to the traders. If you brought a dollar to a tribe that has no currency, they would only see it as a piece of paper with no value. The only reason real money has value is people treat it as having value

But it’s value derives it from it’s selling value. It’s used as a currency basically since it equals to one crown,it’s used to bypass the crown limit. Once it loses that, it becomes worthless. Well not exactly worthless since some people would like a free side of smoke arrows. Sorry if I gave off the wrong meaning with my first sentence.

But then it’d still have value as a trading resource assuming most people keep trading with them. Even if the original reason behind them becoming one disappeared.

Well yes, as a trading resource it would still be valuable to people who want it for PvP reasons. I’m just saying that if it’s selling value is removed then it loses most of it’s usage as a proxy currency.

More then likely but that wouldn’t cause smoke arrows to go entirely worthless until they lose their selling value entirely. I’m just stating that if it’s selling value is gone then it’s main reason for being so popular and valuable diminishes.