The Sunken Sword is Currently Way Too Strong

For example, self explosion and cutlass are all “punishable” because there is a duration where you are stuck in animation after casting in which you can take damage. However, when using the sunken sword there is no duration where you are stuck in animation, and you high jump simultaneously during the attack, so there is no way for you to counter except for blocking.

Now here’s the problem with blocking: the sunken sword user can bait forever so you most likely have to resort to holding block meaning you cant even get a perfect block, since blocking was nerfed (i agree it should have been) you not only take damage but you are also most likely in a bad position such as on the ground because they can bait for so long and not have any punishment not only because of the sword but also because they have a tanky build that you cannot trade sunken sword hits with or you just end up losing because of their regen from a tanky build. They make up for their loss of dmg by using the sunken sword. They also have many possibilities after using the sword and gaining height which they can mix up to throw you off so they’re unpredictable.

Let’s not forget that even if you block the sunken sword special they can use it again in 3 seconds so have fun with that. You’ll be too busy trying to block that they will have so many other possibilities.

The point is that this sword just takes no skill to use, and is ridiculously broken, if you have a tanky build and spam the special there is just almost no way you win unless they make a major mistake. Trust me, I’ve tried. I experimented with this person I usually beat consistently, but with their tank build + sunken sword there is just not much you can do.

Hopefully, there will be some major adjustments.

It has a 3 sec cooldown

And yes, i have the sword as well

In a way you can counter it with self explosions but it is definitely a very annoying weapon to fight against since you typically will never be prepared for it nor is it really worth using a self explosion to as they can just use a blast attack straight after doing double damage on you.

Can the cooldown be decreased with the swift enchantment?

The sword truely is op lol. I just fought a user with a tank build, strong old sword, and strong sunken sword. Even though I tried to outrange the player, he/she was hard to hit since the sunken sword gives a lot of mobility and is almost unpunishable. I had no chance lol

An item that you have a 1/10,000 chance to get out of fishing should be strong

Actually, don’t mean to shit on you or anything, but this recently appeared in the trello! @Popcorn 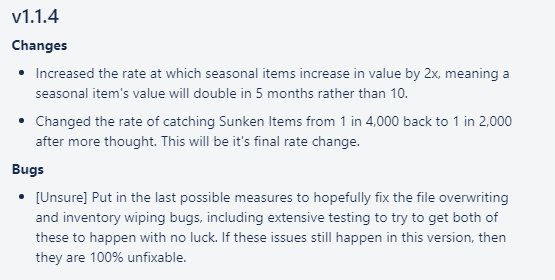 But I do also feel like the Sunken Sword is a bit strong, even if it’s meant to be strong, it’s undeniable that it’s really versatile with it’s special and how much damage it deals. As someone has mentioned before, it really feels like you need it yourself to even have a chance at beating a Sunken Sword user.

It isn’t going to be strong later in the future so just wait ez pz.

well,its a legendary item,LETS UP THE RARITY SO WE NEVER GONNA SEE THIS OPCITY AGAIN

It’s actually only rare tier, it shouldn’t be any more rare than it currently is

that’s what I hate about it, it comes from fishing, and requires luck and no skill to obtain

btw you can fly with it.

Btw it has better blocking than shields.

btw the cooldown is recharging while you’re frozen.

Only way it’s better at blocking than shields is because of this:

nope and what i’ve read from trello, the cooldown will be increased at cost of faster casting speed of swords’ skills

it’s not a weapon bug but misleading Information from the GUI, this shield block more than it shows you on that GUI, good test of it would be just go to wild area and test your shield with low level and with your “Broken” shield, you should notice the difference between two.

It deserves to be op lol its very rare at the moment, even if you traded for it u had to work to get the stuff to trade.

it doesn’t deserve to be op because it comes from a monotone, easy and easily grindable task and the only way to obtain it is through sheer luck.

I see what you mean but you can dodge it and you are able to evade it as long as your not in the sword’s range your fine don’t try to use self explosions either use beam attacks placed explosions and blasts. Besides sunken sword is way more rare to get now so I doubt you will have much luck finding anyone who has it