I made this suggestion a while ago but I think it’s time for it to return.

Mini self made lore

Upon your defeat of Iapetus where the Sky meets the Sea on the Eastern Edge of the World he will offer to teach you in the Old Way of fighting, The Western Spear Style.

Sunset Spear-
The user will rush their with multiple spear jabs causing bleed and intense knockback.
Customizable for how many times it occurs and its potency

Piercing Resolution-
The User will slam his spear like a staff into the ground and spikes will appear piercing his foes in a massive shockwave effect.
Customizable for AoE and how many times it occurs

Final Resolute Will-
The user will throw his spear that much like a Piercing Resolution will cause a shockwave that will pierce everyone inside it. However, it will be larger and in a sphere form as opposed to a shockwave similar to a porcupine.
Customizable for AoE and how many times it occurs

Cutscene Move: Heart Piercing Radiance- User will perform a kicking combo launching their opponent into the air with a front snap kick teleport up to them in a stair-like fashion up to them kick them to the ground and slam their spear point into their chest.

As usual with a fighting style there will be changes to basic combat. The user of Western Spear Style will obtain a amber aura around them and their spear
They will also hold their spear on the mid-way point at their side much like a katana. 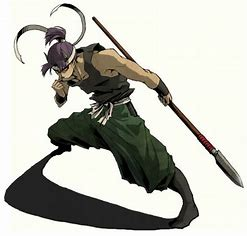 It will lose range however but the attacks will be much faster with and kicking combos will be involved.

Skills need to be customisable

Yeah its a bit outdated. Ill change that now

Still don’t get those weapon fighting style suggestions, currently it’s not really a thing in the first place
You can suggest the weapon skills tho, but there hasn’t been any weapon style confirmed

What’s with you and the addiction to directions.
You’ve suggested 50 North/South shit and now West. North North Eastern style when?

Good Question! First time I got a request ill begin doing it now

This topic was automatically closed 4 days after the last reply. New replies are no longer allowed.