What happened to wither?

but I mean lore-wise does that mean the shadow magic we used in AA was actually the darkness lost magic?

Or if Vetex wants to integrate it into lore, we could say that the Withering capabilities of Shadow died down.

Idk
Darkness is going to have wither If i’m correct

What If Shadow Magic I guess “mutated” or “weakened” with the Magic Pollution dissipating into space? Dumb thesis but hey that’s just a theory

but I mean lore-wise does that mean the shadow magic we used in AA was actually the darkness lost magic?

Big brain question I haven’t seen one of those questions on the forums in a long time. It is

I have the same question. Maybe the War Seas have adapted a variant of Shadow Magic that makes structures and targets colorblind/colorless temporarily and hits harder on impact in comparison to the withering Shadow Magic in the Seven Seas?

Whither was too strong for a starter (it made shadow the meta). 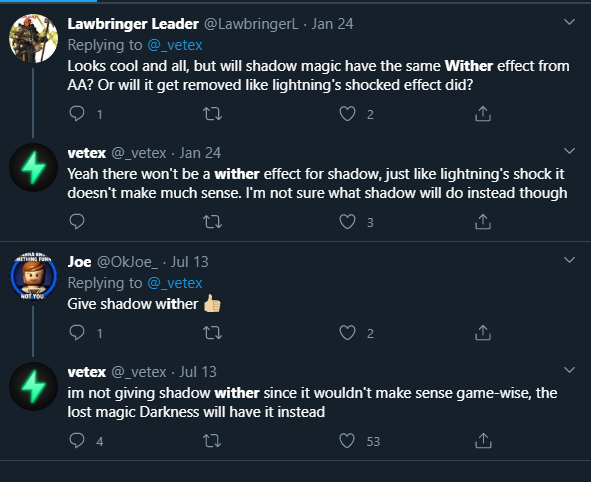