What the hell happened to the forums lately?

I’m seeing a lot of shitty trends going around over the past couple of days. Ik that i’ll probably be called based and the such but like come on, are we really this depraved of everything? I’ve seen nothing talking about how fast the revamped magics were being pumped out, no discussion about what vetex could have done for the new looks.

but these new trends of “1 reply i do fuckall” or “look i rickroll lmao comedy!!!” is really getting stale quick. The forums have the same energy as my fucking pfp. 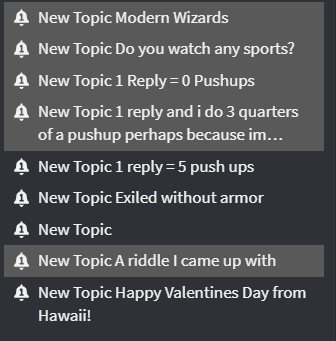 the heck is this

I think youre in the wrong topic, if you want to discuss game-related stuff, theres a category for that. Off topic is just a no-man’s-land that’s more chaotic than the Balkans in the 90’s

it used to have some decency though

it was actually entertaining, believe it or not

Forum’s dead 'till TGR my dude

It’s all off topic, there is no game category, it has been made irrelevant.

thanks for the idea

I’m seeing a lot of shitty trends going around over the past couple of days.

The forums have the same energy as my fucking pfp.

couldnt have said it better

What have I created…

GG on Minecraft Build too

i made the 1 reply=5 pushups originally
the first time it was funny, everytime it happens it becomes less funny

oh yea I almost forgot about the poll

We can always go again