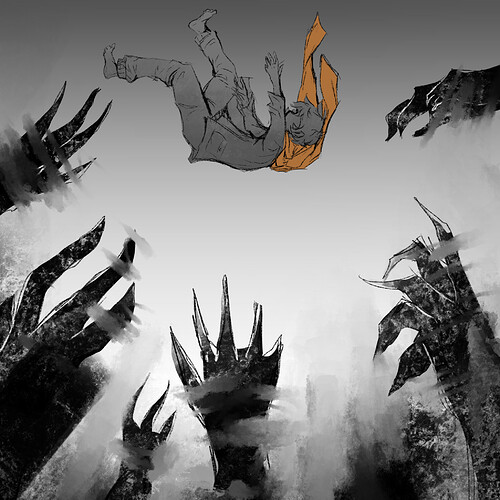 image2048×2048 668 KB
In this piece, Carter is succumbing to his own power after corruption (a little twist I made to WoM to make it a lot more fun to imagine). After his own power and greed corrupt his mind, he joins forces with the Dark Wizards to rebel against the Mighty Magic Council. Who knows if the path to redemption will still be an open window for him?
37 Likes
liu April 25, 2021, 10:16pm #2

Really nice art, and a potentially interesting story as well. I wonder what specifically caused him to join forces with the Dark Wizards.

By greed he may have a filthy gluttonous desire for more power, possibly trying to grow stronger to once more overthrow the Magic Council. Although there are many magic council recruits and members there are also many others who have gone down the path of rebellion. Let’s say Carter had surrounded himself with people who despise the Magic Council. To me, corruption is when the use of a system, or some other things that are supposed to be beneficial, are used for the wrong reasons. In this case, he is overwhelmed with the thoughts and complaints of many others like him talking about how the Magic Council is unfair and harsh on the Citizens, and etc, fueling his motivation to rebel. That is where redemption is in his wake but this kind of corruption that is lingering around him is composed of being ignorant and pessimistic. It’s a lot harder for me to explain knowing that his true story isn’t complete yet but I will go into further detail once I set it all out. ^^

then he just wakes up on a ragdoll isle