the testfire for splatoon 3 just came out, so i wanted to know some people’s opinions on stuff

which team are you on?

what is your favourite new addition to the game?

what is your least favourite new addition to the game?

what special weapon is your favourite?

do you think it’s better than splat 2

this demo really felt like splatoon 2.5 cuz u cant access most new features so i cant tell whats my new favorite feature yet actually being able to do stuff in the lobby while waiting is probably the best feature by far

theres no stingray so ofc its better than splat 2

big man is the god

fr, having to hit three things at the same time is really hard, but you get used to it after a bit 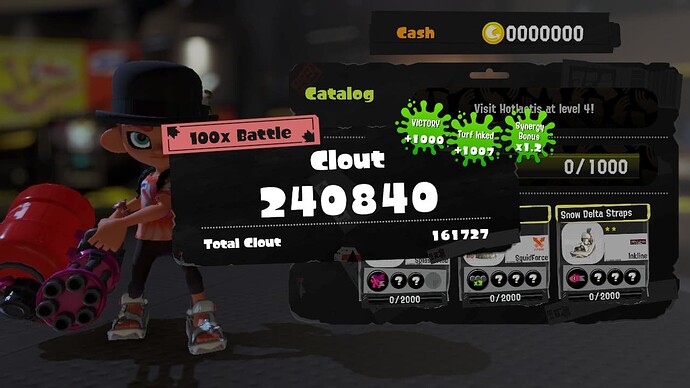 nice, i didn’t get to see one cause i started playing tri colour at some point, guess regular is more profitable

scissors ftw
i love all the new specials, not as stupid as splat 2’s but feel as fun as splat 1’s
i don’t really have a least favorite addition
splattershot pro was fun
crab tank crab tank cr a b ta NK
much better than splat 2

I was on scissors but it ended already where I live,
I think scissors won but It never actually told me.

As a scissors player, yes tri colour is difficult but I managed to win one.

As a first-time splatoon player, I really enjoyed the splat charger because the satisfaction of sniping people is worth my lack of skill with the weapon.

Ink Vac is fun to use even if I only hit one person with it throughout the entire splatfest.

No idea if it’s better.

I think scissors won but It never actually told me.

i don’t think they’ve released the results yet

I wanna get splatoon 3 and furi 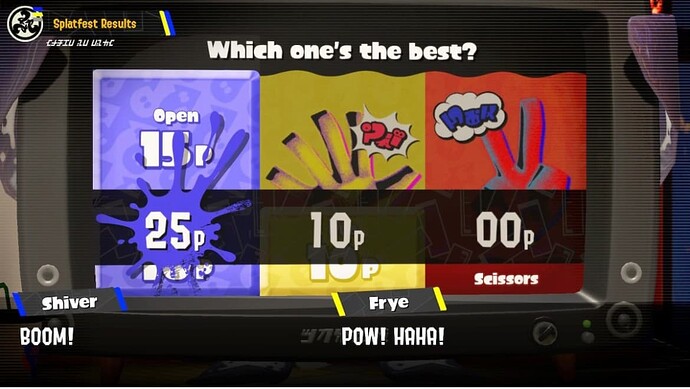 we only lost because tri color turf war was unbalanced asf

fr, those sprinklers cover way too much turf

the grade is based on clout from both open and pro. Tri color is an open game mode and it only counts for very little of it cus turf war is so much more popular. Even if you say open was still rigged you still lost in pro which only counts turf war (and that too you lost to paper lol). Even if you guys won the votes which I have no idea how rock won, you still would have only tied for second place.

wait, what happens if every team gets a point in one category?