Hello everyone! In my first E-Book I received several criticisms about my E-Book, and some positive, but well, I read and reread it and today I will be sending Episode 1 of Arcane Of Magic, I hope I have improved in some aspect, the Cover of the “Book” I will leave in the same way, if you have any suggestions, comment below.

For those who want to go to the Prologue, access this link: Prologue.docx - Google Docs

Good reading and have fun! 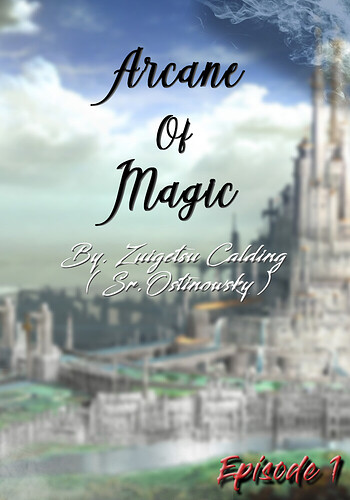 I’m sorry for any mistake, I intend to improve my readings over time!

I forgot to mention that I am a Brazilian! So I’m having to use Google Translate, if some parts of History get weird, it’s because of the Translator!

Please use a different font in the future. The one you chose is hard to read.

Also you’re a genius, gonna try putting my own pdfs on drive in the future.

You use Google Translate which is understandable but use you too many commas which make the whole story just one big sentence.

Story wise I would say that this was pretty good.

Nice story but what a bad brother!

Somebody already mentioned to use less commas but I also realized you use “he” a lot.
I’ll give you an example:
Juigetsu went to the shop, he bought a chocolate, he gave the shop man money, he went outside, he ate the chocolate.
Instead:
Juigetsu entered the shop and purchased groceries. After giving the man money, he helped himself to some of the snacks outside.

I don’t know how translators work, but translate a simple word into english, then find synonyms for it. For example you translated “walk” , then after search “synonyms for walk” and boom, 1 level higher.

Take it slowly though. Don’t over-do it and limit yourself to 2-3 commas in a sentence. Most people think short sentences are bad but to really progress you have to start with short sentences.

Oh and I think, change the font. Maybe to the one you used to right the “speeches”

Ya bro, I realized that the source caused “Zuigetsu” to become “Luigetsu or Juigetsu”, so in the next part I will change that. haha.