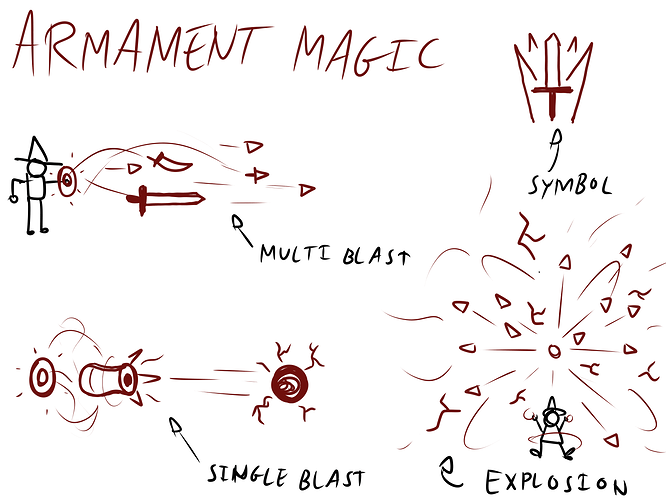 armament magic is a unique magic that’s main niche is to absolutely destroy enemy defenses such as shields, at the cost of increased stamina loss, just as if you were using a normal weapon, this magic however does not have after effects like weapons, and instead has a critical hit system where there’s a small chance this magic deals a little extra damage, followed by a satisfying noise, the chances are increased when aiming for the head, however this magic also bears a little screen-shaking and recoil when fired, making it harder to land crits.

btw the crits also deal extra damage on shields and such, this magic surprisingly deals kinda average damage to players themselves (though for a lost magic of course, so it is still pretty strong) but it can shred through any defense with relative ease, as long as it’s on the same level or lower than armament magic itself. some very rare and powerful shields could maybe withstand it better but even those eventually will rather quicky falter against a magic of weapons

now for moves that mimic cannons, no, it’s not good at destroying ships sadly.

however it is actually quite fast. and has above average clash rates

This is cool and all, but I feel like the shape option for magics would have these kinds of attacks.

You get this idea from one piece?

So slash magic but with actual weapons

If you can make vines a special sort of grab move where you can still do stuff but can’t deal damage to the person, then I think there will be some trolls using it in people wearing the maid outfit. Enjoy

I mean the idea I was going with is a short stun called “Tangled”, which wraps people in vines for maybe 2 or 3 seconds. This stun could also buff the attacks of some magics like fire or acid.

at the cost of increased stamina loss, just as if you were using a normal weapon

So using this as a conjurer would use a lot of stamina since the weapon itself and the magic both use stamina.