Best bow in the game?

So I was playing minecraft dungeons, doing an Ancient Hunt to get rid of some of my excess loot, and I ended up killing an ancient and got this gem. 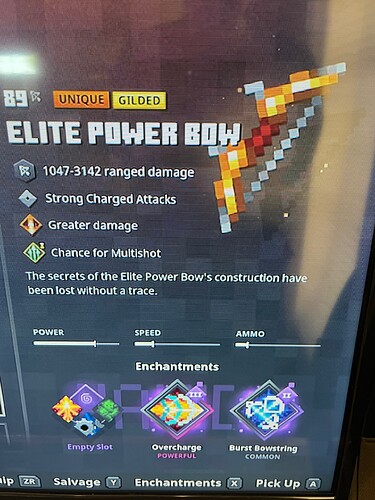 image1920×2560 865 KB
(sorry for glare, i tried to send myself the screenshot but it never loaded.)
so basically, power bow already was my favorite bow in the game, but THIS THING IS INSANE. i was previously using a gilded power bow with overcharge and burst bowstring (the 2 ones i invested for on this one as well) and i got a direct upgrade. oh yeah the gilded bonus on the last one was more emeralds from mobs which i don’t really care about but the multi shot and power enchants on this one are quite good

. not to mention that the multi shot also synergizes with burst bowstring (fire an arrow on roll.) now the 1st enchant options are pretty meh, radiance is the one i’m prob gonna go with but i might not do any enchants on the first one unless i absolutely need to. i dunno how i got this lucky because like every single ideal enchant and modifier was on there and worked out perfectly. it’s so good i might be able to just upgrade it and use it for the remainder of the game tbh. oh yeah another funny thing is that i got this bow by cheesing the ancient with the previous gilded power bow.

Is this like soul knights where bows are busted

i can confirm, this is one of the best bows you can get in mcd

if any of you guys do still play, there’s a trick i found. if you ever need to complete matches for an item upgrade, to reset merchants without paying for restock, or to just get a lot of items to sacrifice to the ancient hunt, do arch haven repeatedly. (it’s the secret mission in pumpkin pastures.) basically it’s like the shortest dungeon in the game, and since it’s not auto generated you can find 2 hidden loot chests in the cave every time. 1 is right next to the cave entrance but you have to step on a pressure plate on top of a log to reveal it. then there’s one near the exit but you have to climb up the rubble on the right side of the wall and roll over a ledge to reveal the other chest. really good method and i’ve gotten 3 uniques from it already.

yeah i used to grind arch haven but now i just play ???/moo (whatever you call it) because its fun