Anybody remember Captain Ahab? He was a Level 125 roaming boss in Arcane Adventures with 2000 Health. He would roam around in the First, Second and Third seas on his very fast sailboat, the Spear of the Sea.

His only method of attacking was throwing his spear, for around 550 damage. His entire character is an obvious reference to the book Moby Dick.

Ahab has been entirely forgotten after Arcane Adventures broke, with almost nobody remembering his existence.

So, I’ve made this thread with the sole purpose of acknowledging his existence.

Below is an image of him. 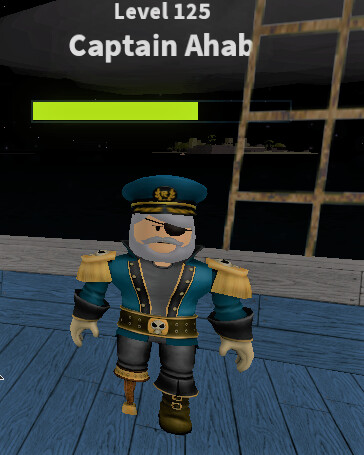 He looks pretty similar to somebody else…but this might just be a coincidence…right?

I read about him on the wiki, and was confused why he was gone from the AR wiki until I realized he was scrapped. While honestly out of place compared to others, I don’t understand scrapping him.

I haven’t really fought him on AA, or at least I don’t remember doing so, but seeing the title of this post instantly reminded me of him.

While honestly out of place compared to others,

Captain Ahab himself is kind of strange.

He’s just an old man that sails throughout the seas, armed with nothing but his boat and his trusty spear, in a world filled with magic and curse users.

It’d be nice to see some lore of him, but I doubt Vetex would create lore for such an obscure character.

Yeah I remember him spawning in front of me and freaking the fuck out, then I proceeded to defeat him in less than 20 seconds

Not even close I believe

did he have any drops? I played the fuck out of AA but i don’t remember this guy at all

Don’t think he did. Then again I only bothered to kill him once or twice.