ive been thinking about leaving the internet altogether lately. ive been kinda in a perpetual state of paranoia, it feels like im being manipulated because of the increasing amounts of crab-related imagery im seeing. in particular, the massive popularity of Dani’s crab game is super offputting. ive lost all respect for dani after this. i also have been seeing a ton of memes and stuff talking about them in a positive light almost worshipping them 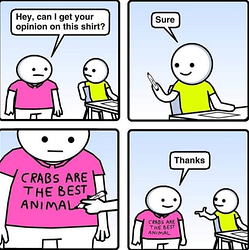 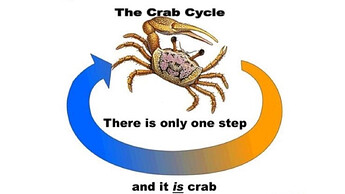 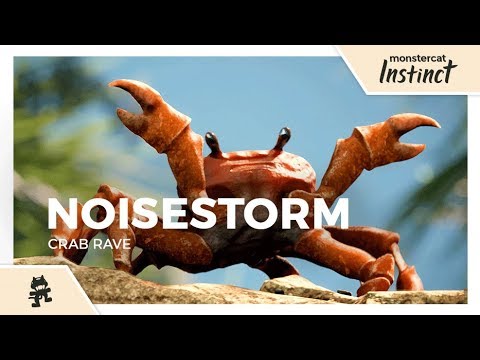 and seriously these are just a couple examples there are way way more. theres no way any of this is just a coincidence. people are being manipulated. theres someone bad in control whos trying to make us like crabs. crabs should not be liked. they are genetic abominations and if we let the people who are in control manipulate us it could mean the end of humanity. i have no idea who would want to do this but its probably some kind of crab worshipping cult or like the crab illuminati or something. i dont know who they are, i dont know exactly what they want to do. but all i know is its not good. its possible that they want to kill all animals but crabs or turn everything into crabs or possibly even make earth into the new home of the crabfather and all of these would spell the end for humanity. we cant let them break our spirits or convince them that were ok with this and im willing to try and stop them even if im standing alone but i dont know how much i can do against some kind of unknown organization with far reaching control over the entire internet so im just considering leaving and also encouraging others to do so. all i know is i will not submit to the crabs. i am not afraid of them no matter how evolutionarily powerful they might be.

Same man, people like this is what makes my blood boil!!!

what does this video have to do with crabs. this is a serious topic that needs to be discussed and posting memes is not helpful

eh snails are just animals. not good not bad just a little gross

Nah man they’re pretty much what I want to be in life, just a little gross little alien creature moving along until I die

its a bit confusing to call snails aliens in this context considering the origin of crabs.

i am generally confused, is this a joke? Pretty sure it is…

it’s not a joke, he’s really leaving the internet

this is not the place for that

simplified version; crabs first existed very far away and were forced into existence where we live fairly recently.

Damn bruh you really givin us the crab lore

well congrats on waking up. you know the truth now

Can I go back to sleep