Does anyone here know how casting speed actually works and what it does?

I was doing an extensive rant in a discord involving guessed numbers and theoreticals because as of now, a lot of the enchants other than power and defense don’t even do enough to get through the 60 frames per second of the game. here’s a few screenshots of my little rant. keep in mind, this is all guessing (other than some of the numbers which i pulled from testing and the wiki). 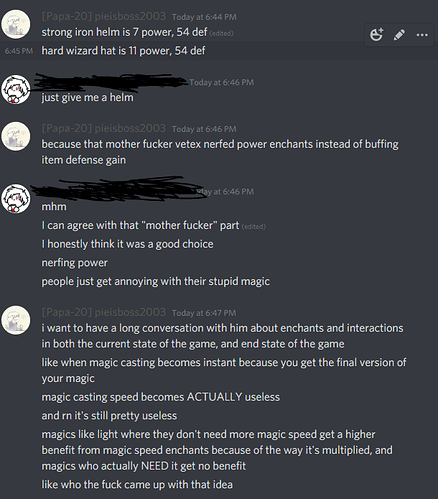 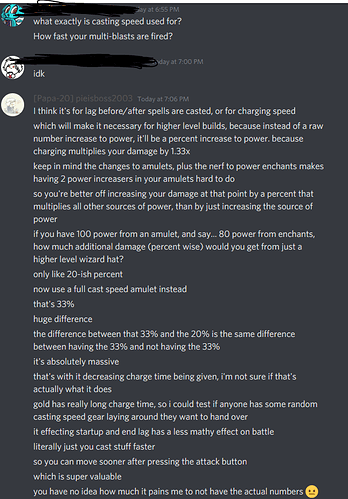 I think he is mixing up magic speed a bit with casting speed.

As per my elemental magic guide:

“…magic speed multiplier affects the speed of projectiles, flight spells and speed modes (not cast time, that stat is the same across magics). Magic speed also affects some other spell types in different ways, such as decreasing the cast time of explosion spells with a magnified effect on placed explosions and increasing the travel speed of beam spells.”

He mentions that Gold Magic has a “really long charge time,” even though its casting speed for explosions is slower solely due to the fact that it has low magic speed, and fully charging any spell is a 10 second length across the board, regardless of casting speed.

All casting speed does is reduce the cast time of a spell with NO effect on their endlag whatsoever.

It would be nice if the casting speed stat reduced the amount of time it took to fully charge a spell. It’d make it more viable offensively rather than just to get out of cast time faster.

This is me talking in the screenshots by the way

Also, i didn’t mix up casting speed and magic speed, just at the beginning i was talking specifically about MAGIC speed, and at the end i was talking about CASTING speed. It’s a bit confusing because it was more of a rant

Wasn’t aware that charge time was 10 seconds across the board, though i do remember playing from about a month ago with my ash character, and it having a lower charge time than my current gold character. not sure if that’s me remembering incorrectly, or if it’s a change that was between then and now.

Thanks for some clarification. do you have any other numbers or anything?

To this day I still do not know exactly how most stats exactly scale, only that they scale logarithmically and that 160 Magic Size is a 50% increase (don’t know if its the same for everything else).

So logarithmic has falloff the higher you get, and becomes less useful, where linear doesn’t until you get to a cap (if there is one)

Every stat that gear gives except for Power, Defense, and the unobtainable stats scale logarithmetically. Those few scale linearly.

pog, thanks. feels weird that magic size would scale with a log, considering how it doesn’t seem to have an inherent cap.

Any information on the lim for magic casting speed? doubt it would be experimental now, and if it is, holy shit it’s low.

NO effect on their endlag whatsoever.

wait what
man cmon casting speed should reduce the endlag

Okay, so just as meta said casting speed reduces the cast time of spells, however its negligible as it doesnt reduce the end lag, figures that you can cast the spell really fast but still stand in air for the same amount of time as you were casting it normally. Kinda bs.