Knights/Melee users in World Of Magic, is resorting to mostly melee any good?

Hello!
Been thinking about becoming a melee user since I heard that your power stat doesnt affect melee damage
Is tank melee good for pvp? I don’t see a lot of people using melee builds so I don’t want to shred time farming crowns if a melee pvp style ends up being bad

Why would you go for a pure melee build in a game called World of Magic though?
99.9% of the customization and armor sets are for magic.

to flex on inferior noobs

I mean, I’ve seen someone use castilan sword + old sword + sunken sword q combo spams, but its honestly easy to beat if you keep a distance away

i don’t have a lot of experience with tank/melee builds, but it’s seems to be somewhat viable, you are gonna have 1200+ hp and a fairly good amount of damage input, you should try it out 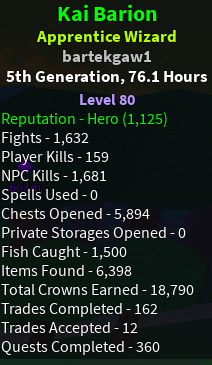 Is tank melee good for pvp

defence vs defence
ask your oponent to watch some tv with you, there is no point

Just use both lol

for full melee, you need a full tank build
keep in mind, you still need to use magic to be viable,
be it explosions/high jumps, well timed beams etc

some magics actively benefit from the target having bleed

overall I don’t think its as good as almost-full power though, since magic is much more convenient

For one of my slot it’s a melee user meant to be a tank and support build.

Is it worth? I personally just enjoy it because of the theme and story—not much focused in pvp.

IF you know how to use it, the build may potentially be better than using magic.

Former “Knight” here.
I don’t recommend it for PvE or PvP. Sure, a Vistarian Spear against some Bandits/Mercenaries/Pirates/Bounty Hunters annihilates them when not sprinting, but magic works best on Dark Wizards/Light Wizards, Heroes/Villains, and Players.
The reason? Your magic has range, more than even standard bows. And if you feel your magic is a bit slow, just get like a piece or two of Magic Speed gear, it easily changes how many attacks you can hit.

An advantage of non-magic builds that I never thought of before is when the drawback stat is added, there won’t be any drawback to having large amounts of it.

Ouu a defense and nimble build might be fun now that I think of it. Very later in the game when nimble makes you Sonic

Melee’s viability depends on what magic you pair with it imo. Magics with good bleed synergy, like ice and wood, are probably the best bet for a melee build, partly because you can combo great spin into self explosion, and partly because those magics tend to be slower giving them a smaller effective range, a problem mitigated by using a melee build. Slower magics in general are better paired with melee for that reason, so heavy magic melee builds should work too, like gold or iron. Certain magics (like ash and light) get more benefit from keeping a safe distance from your opponent though, so using a melee build defeats the purpose of using those magics.
Either way, since you are at close range you will want the extra hp to keep pressuring your opponent for longer and to approach safely, so using a tank build isn’t a bad idea.