Mage - Everything you need to know

How to become The Mage?

When you start a new file, you start without any stats in any out of 4 category: Vitality, Magic, Strenght or Weapons.
In order to join the…The chaddest stat build gang…You need to open a character menu. You’ll see this. 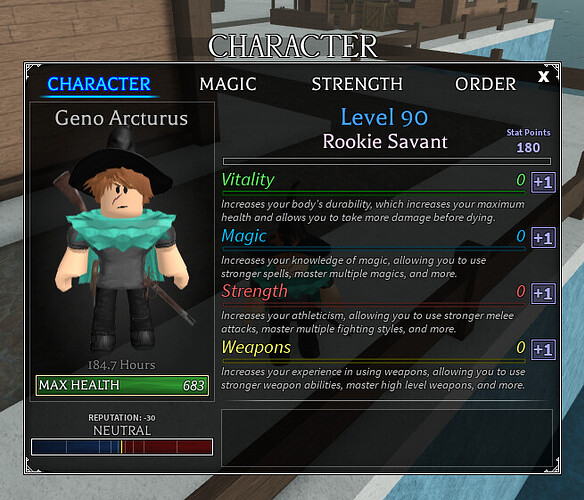 This menu you will use for 3 things: Investing your points ; editing spells through “Magic” section and keep track of “Order” (Story related stuff.)
For each level you’ll get 2 points, meaning that you i’ll start game with 2 points and at level 120 you’ll have 240 points.

But if…For some UNGODLY reasons, you’ll want to become a HYBRID (Ew, cringe, we dont like these here), then here’s how you can do it.

Reals mages always put 100% of their points in magic

Why do i need these points?

Its quite simple - In AO, to unlock new spell, you need to invest Magic Points, not level as it was in WoM. To unlock new spells(30 points per spell) and when you unlock a new spell type, the spell is now automatically created with default values and put in an open spell slot if you have one.
And so we have this.

“Ult.Req?” - you might ask, yes, each spell has its own option called “Ultimate art”. There only can be 1 ult.spell per magic, and to create such spell, you’ll need 200 more points than the spells cost of points.
Ultimate art by itself just boosts the spell drasticly, in the cost of more mana cost and longer casting time.

And you might ask me about “Dash” spell. Well, peopel from the future, back before the release, all we know about 5th spell is that it was “Vertical movement type spell” and so some started calling it “Magic Dash” spell.

What’s the benefits of Mages?

There’s alot actually. If someone like blue-flame-named-guy tells you that Mages are boring or smth like that - dont listen to him. Mages by the end of game will have 5 different and unique magics(3 base, 2 lost / 1 lost 1 ancient), ton of customizations for your magic and tons of powerfull spells.

Magic hybrids in other hand, will be able to have only 3 magics (2 base and 1 lost/ancient) and some minor feature:

Mages > Pure builds >= Savants > Everyone else

Will YOU join our gang?

Warlocks for the win

Anything else than Mage gang

But if…For some UNGODLY reasons, you’ll want to become a HYBRID (Ew, cringe, we dont like these here)

Nah, best of both worlds

Reals mages always put 100% of their points in magic

Can’t beat punching someone in the face wth elemental powers

Mages by the end of game will have 5 different and unique magics(3 base, 2 lost / 1 lost 1 ancient), ton of customizations for your magic and tons of powerfull spells.

Yup, plus getting these things a lot earlier than other magic classes and reaching higher tiers (bigger boom visuals) faster

Will YOU join our gang?

Bro did a full on prep guide before AO is out. Mage gang tho fuck yeah

mages are the embodiment of cringe

i will join mage gang because mud magic

pls help i dont understand how do math

I’m going to put around 3/4 of my points into magic and the rest into vitality so I don’t die.

I think vetex said we’ll be able to get awakenings on release, so level cap is probably going to be 120+

I think you need 100% in magic (if release level cap is 120) for shape options on the Blast Spell and Explosion Spell, I could be wrong