other people were making forum icebergs so uh i decided to make my own. here it is. it has some extra shit that wasnt in the others i guess
if it has T next to it that means that it is a theory 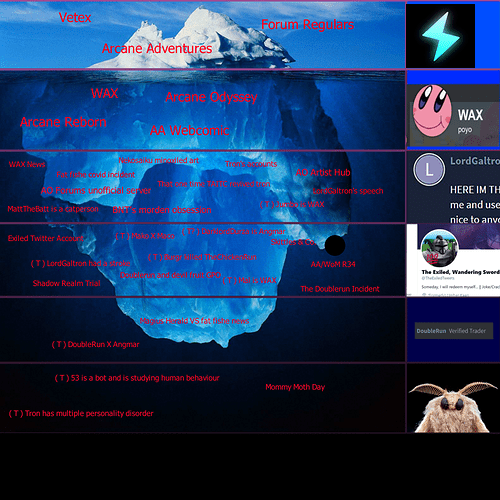 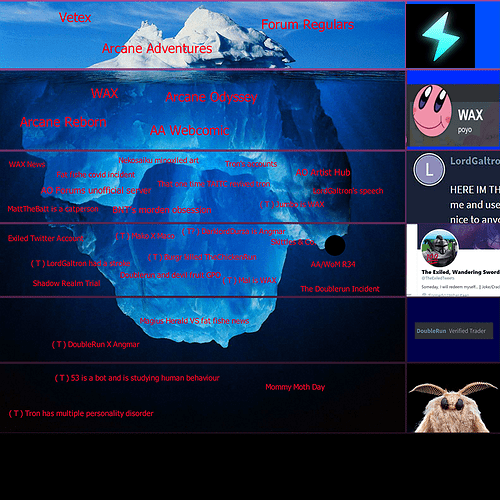 Vetex: The creator of World of Magic and the owner of this forum.

Arcane Adventures: A previous game by Vetex. It was broken when filtering enabled was forced in 2018. World of Magic is a sequel to this game.

Forum Regulars: This title is given to active members of the community.

WAX: A well liked user who is rarely serious.

Arcane Odyssey: World of Magic is currently being revamped. When the game is finished, it will be called Arcane Odyssey.

Arcane Reborn: The most popular remake of the original Arcane Adventures.

AA Webcomic: A webcomic created by LittleShrekSheep based on Arcane Adventures.

Tron’s accounts: This was before my time.

WAX news: A news source run by WAX. It got to three issues before ending.

AO artist hub: A discord server for AO art. A lot of wacky hijinks go on in this server.

That one time TAITC revived Tron: This was before my time.

LordGaltron’s speech: Something something infamy happened that pushed user LordGaltron over the edge, and they freaked the fuck out. Their temper tantrum became a bit of a meme because of its over-the-top nature and comically poor grammar.

Jumbo is WAX: I guess some people think the accounts “Jumbo” and “WAX” are owned by the same person.

MattTheBatt is a catperson: This is a meme. There is a thread titled something like this that has been active since june 2020.

DarkLordDurza is Angmar: DarkLordDurza and Angmar were accounts that were widely hated. I thought it was confirmed that they were the same person, but I guess not.

Burgr killed TheChickenRun: I know who these two are, but I don’t know what supposedly happened.

LordGaltron had a stroke: This one is more a joke than a theory. LordGaltron’s rant made so little sense that some people speculated that they had a stroke.

DoubleRun and devil fruit GPO: Doublerun attemped to buy a devil fruit in Grand Piece Online for Robux, which is not allowed.

Mal is Wax: Some people believe or believed Mal and WAX are the same person.

DoubleRun X Angmar: I ship it

Tron has multiple personality disorder: I have no idea.

fuckkk, i forgot to add a shitload of things like the obamas and the forum presidents

Have another one: Krystal Galleon x Percival Erotica

It is. It was a post that got immediately nuked for being NSFW. It was an erotica on the forums that was of those two guild leaders. Forgot the writer name, though I still have the erotica archived.

I would in DMs, but I think mods check DMs so what’s your discord?

Tron’s accounts: This was before my time.

That one time TAITC revived Tron: This was before my time.

Tron if he sees all the worship, praise and blood rituals we've done for him to return Off Topic

ignore me btw im dead none of this is real

Burgr killed TheChickenRun: I know who these two are, but I don’t know what supposedly happened.

Are you go treat or trick? Off Topic

DoubleRun X Angmar: I ship it

Tron has multiple personality disorder: I have no idea.

Tron has a bunch of alt accounts. Each has a distinct personality. Either Tron is a great roleplayer or he has MPD.

That Rebel group that was against the MC? If so, that’s long been disbanded, and wasn’t even mine. We’ve moved to a new one but that one is as good as dead lol

the doublerun incident refers to the time he posted the magius herald thing to the forums because angmar was banned, it apparently had slurs and a shit tonna misinformation