Recently, on the AO trello, we can find the Mounted Fishing Rod, an equippable ship tool. While it is certainly a good thing, I feel like it could either be improved or replaced.

This suggestion will actually involve multiple features, and if you dislike any particular individual feature, please reply below. Also if you don’t wanna read it go hit the TL;DR in the table of contents.

These features are necessary and the suggestion does not work without them.

These are equipped onto a ship as a tool. They appear as a gray metal winch and act as the item that allows you to use a net.

Nets can be equipped to a Net Winch, upon which a brown rope that splits into a large net appears wrapped around the winch. The net itself is a conical object, split in half vertically so that it appears like a triangle when viewed from the side. It does not collide with anything and passes through obstacles.

Nets have a certain number of stats, as follows.

Price – The amount that one must pay in order to buy the net.

Catching Rarity – How likely a net is to catch rarer fish.

You can purchase nets at the fishmonger’s.

Nets have a small healthbar-like UI hovering above them, indicating how much of the net’s capacity has been taken up.

A net is attached to a net winch, upon which the net begins automatically catching fish. Nets do not automatically send the fish to your inventory, but rather store the fish themselves. The net can be hauled up at any time. To haul up a net, the player clicks on a Net Winch with a net attached, upon which they are prompted whether they wish to haul up the net. If they agree, an animation not unlike the fishing animation begins playing.

The time it takes to haul up a net is determined by the net’s capacity and how filled up it is. Once the net is fully hauled up, the fish are transferred to the player inventory. The net itself is also returned to the player inventory. The total time it takes to haul up the net is far less than it would be to fish each fish individually with a rod.

Cool stuff that adds to the suggestion but are not necessary.

The total capacity of the nets attached to a ship determines a certain reduction in speed to the ship. The more and the larger the nets you have, the slower the ship goes. Furthermore, the more filled the nets become, the slower the ship becomes. This helps discourage simply putting massive nets on a ship, providing more nuance.

Nets will also be able to be deployed without a Net Winch. When used this way, the net is a flat circle that floats at the surface of the water. A player who deploys a net can see a small marker, both on their map and as GUI, with a small fish symbol that also indicates how filled up the net is. If the symbol turns fully green, the net is at capacity.

The net slowly and automatically acquires fish, but slower than if it had been attached to a Net Winch (and thus a ship).

A net deployed this way can be picked up again by any ship, encouraging careful placement and not spamming nets, because any opportunist can come by and pick it up if they have an empty net winch. However, only the player who deployed the net gets the marker, giving them an advantage. To pick up such a net, the player simply has to sail over the net and click their net winch, which, if empty, prompts them whether or not they wish to pick up the floating net.

If they agree, the animation plays again and the net is put into the player inventory along with the fish within it after the time set by the net’s capacity and how filled it is.

There will be 3 types of nets.

Drift: The simplest type of net, Drift Nets catch fish as described above. They are the Wooden Fishing Rod of nets.

Baited: Baited nets have a different capacity system. Instead of depending on rarity, they depend on number of fish. Therefore, a baited net is filled when it has, say, 20 herrings and also when it has 20 Great White Sharks. A baited net stores a certain amount of bait. For every fish it catches, 1 bait is used. The net can be baited with less than the maximum amount, but if it runs out of bait it catches no more fish. These nets have a certain risk and reward: if you get rarer fish, you’ll profit more, but if you get more common fish, you may even lose money.

Drag: Drag nets are the only nets which can catch items. Like fish, the rarity of the items determines how much capacity they use. Drag nets are clearly much longer than drift nets, and cannot be deployed without a net winch. They have the most capacity.

Like fishing rods, nets can be enchanted. There are 3 different enchantments.

Simply put, the current Mounted Fishing Rod has a simple purpose: Make fishing feasible. It’s simple, automatic, and thus not boring. But it also has many failings:

Firstly, it makes no sense. A fishing rod, with no bait, randomly pops fish out of the water.
Like wth, what is this, Fish Magic???

Secondly, it serves as a passive income system. Basically, there’s no player input. You attach a Mounted Fishing Rod and sell the fish you get. There is very little reason to not do so.

A net system on the other hand makes plenty of sense: nets exist IRL and IRL they work (somewhat) in this way.
It also is partially active. It requires you to haul in the nets, but it isn’t clicking simulator either. It also gives you choices on what type of nets to use and how they’ll affect your ship, whether it be in speed or mounts used. It serves as a money sink and a risk-and-reward thing, where you can make lots of money or even lose money, while the automatic fishing rod is simply free cash.

Add nets because they let you catch lots fish and no stupid clicking simulator.

Also because they better than stupid automatic fishing rods that magically teleport fish out of the water.

No, that obliterates the entire point.

Drag : Drag nets are the only nets which can catch items. Like fish, the rarity of the items determines how much capacity they use. Drag nets are clearly much longer than drift nets, and cannot be deployed without a net winch. They have the most capacity.

I like all of this except the net failing.

Trawl netting could be a really good addition to AO as an alternative way of getting fish or items. The effects are reasonable and it isn’t a sure way of making a profit but a slight risk, the net winching could possibly take a bit of time for a little bit of vulnerability as some other pirates can compete for a net, which in turn encourages travel at the open sea. The open sea could have better fish and increased chance for items but I would assume the weather would get worse out there as well to gain a higher risk and a higher reward.

I mean I guess. Will remove.

I like it. Also, how did you do the things on the side? 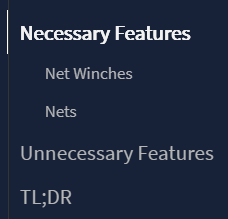 All credit to BNT for putting in a tiny tutorial somewhere that I searched for and found.

AA story retold badly by yours truly Off Topic