By the term ‘New Guild’, I’m referring to the guild tier, not a newly created guild.

I know that most likely everything I’m about to state could’ve probably applied to none other than myself an odd year-ish ago, but I decided I’d point it out, makes a good excuse for me to write a long argument with myself or show my own thoughts. Also, the majority of this post is me being satire, so don’t take it too seriously

Anyways, this observation is mostly about ‘new’ guilds, or, if anything, the behavioural patterns of a new guild leader which, frankly, piss not me, but many others off.

To get straight to the point, new guild leaders over time can either get bullied out of the community or develop an over-expanding ego which fuels their own interest to lead a guild, you’ve probably been on WoM every now and then to see some new guild with over exaggerated goals, like for instance, the stereotypical ‘we will overtake suncry, fuck you!’ type of guild, everybody has seen those, but I decided to question (this is where the topic makes a spiral into insanity), why the fuck does this behaviour occur with newer guilds, will these ego-driven idiots learn their place?

Competition in itself involves the concept of attempting to become the best, does it not? Are these new guilds just attempting to become the best they can be, and try grow their own sub-community? More or less, you could definitely say so, the existence of a leaderboard inside of World of Magic supports this nevertheless, there’s always going to be the struggle of newer guilds attempting to grow, setting themselves insane goals, and then failing to achieve them because they haven’t learned to stay in their place like the absolute scum they are.

You’ve also probably seen a large amount of guild advertisements in #guilds:guild-recruitment when it was open with much smaller guilds, that of which can barely reach 10 Infamy inside of World of Magic with insane requirements, making people more or less branch away from their guild due to their leader being too demanding of members, making their guild stay small, unable to grow, and unable to gain infamy. Leaving them in, what I’d like to call, 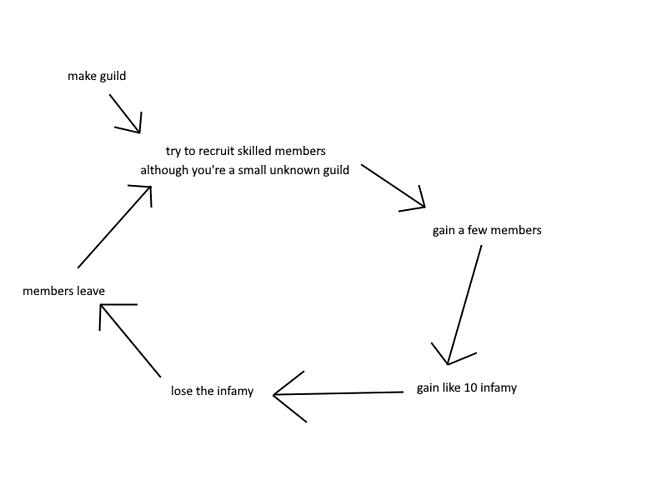 This is mainly the process almost every single small guild went through before the announcement of the Infamy Reset, and, realistically, it’s inevitable for this to happen inside of Arcane Odyssey as well, but, now, the real query at hand in this scenario is, how do you escape the skill issue paradox?

Well, if anything, I do know the fundamentals of escaping the skill issue paradox, why is this not in #guides:game-guides you may ask? It’s due to the fact that everything up until this point was satire, now I’m going to delve into my take on how to escape the skill issue paradox (hopefully this logic will still apply in Arcane Odyssey), so I look really smart for preparing myself.

So, to re-iterate myself, here’s my self-observation and overlook on how to escape the skill issue paradox.

You may be unable to take me seriously after I said this, but, it sort of applies, if you, somehow, have no accomplices whom are decent at PvP, your best bet is to recruit worser players, and develop a larger capacity of members, when you’re a new guild, quantity can be a make or break if you’re bad at PvP, so you want to use this when required.

If you recruit a member and they have absolutely no reason to be in your guild because they’re an absolute stranger, they’re most likely going to leave if you don’t develop some sort of friendship with them, so, you want to be able to be friendly with all of your members and form somewhat of a community.

Yes, that is all I did to get my guild to rookie around 13 months ago, I escaped the skill issue paradox, and all you ego-driven 12 year old guild leaders can too.

I still have no clue why I made this topic other than to share a lingering thought I had which could apply in AO as much as it did in WoM.

ive talked to a few guild leaders who own a very small/casual guild. here’s what they’ve said.

a lot of guilds ingame are little timmies who are one of all those options except 2 and 5. however i do see a few bank guilds on
i think as well, people want to make/lead a guild because they want to make friends in a way? like not make a full on friendship, but just to have the feeling of leading a group of people, and being able to call them your “comrades” if you get what i mean

i think as well, people want to make/lead a guild because they want to make friends in a way

amongus sussy is built on mutual trust and understanding

want to try and lead a decent guild (knows what infamy is, got a small team that is willing to farm it)

The only type of guild that becomes successful

I can agree with you and Misinput, there’s about 80 or 70 guild discords rn, there’s some that are reasonable people who do indeed take a shower and touch grass
people who tryhard too much on a game that’s gonna get wiped (ahem DK ahem)
there’s people who are trying their best
people who just wanna have fun
people who wish for literal world domination (children)
and then

I feel bad in advance for all the guild-only focused people, who will eventually rage out of AO and never touch it again, calling it garbage regardless of it’s actual contents.
good observation arc and mis

i want to try and lead a decent guild (knows what infamy is, got a small team that is willing to farm it)

just trying to help you pvp

I have classes yknow

also I can’t play WoM on a chromebook

Bro I remember when a bunch of the kids like 3 years ago when I was in middle school were like bypassing play store restrictions with phone numbers and alt accounts and verification crap, you could actually play Roblox on the school chromebook

I saw you in a game

I wasn’t on roblos then

Probably not, though it did have the PC controls (I think maybe the mobile UI also showed up)