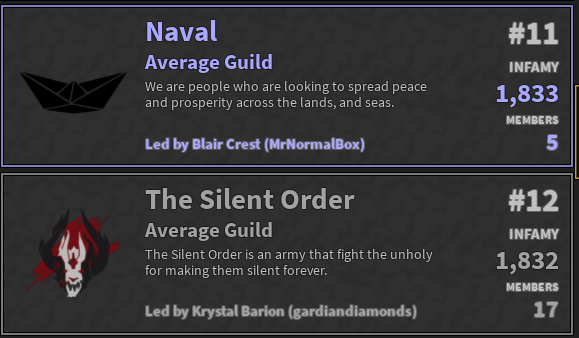 naval is finally at it’s rightful place once again

I haven’t heard much about silent order, are they just really competitive on the leaderboard or something?

yeah they got pretty far up on the leaderboard just by farming because the LB guilds stopped playing and new guilds are just free infamy. i’ve heard people saying that their members + leader are bad at pvp but i’m not completely sure. i’m friends with one of their members and she is actually pretty good at pvp and did a lot of infamy farming. she got my friends random guild halfway to rookie just because she felt like it. so yeah silent order (used to be) leaderboard competitive and really just got there because there was no competition + new guilds are just terrible and ended up being free infamy for them

Thanks for the info

There’s about be a war

are they the alt farmers?

Last time i pvped the leader, he was terrible at pvp. It was a 2v2 though and everybody including me sucked. I think everybody used a 20 blast during the fight at some point. The only thing that really made me mad is that me and my friend got ganked by them and we weren’t even guild members. He attacked us because because we were on demon rep files and at the time he was one of those “Hurr durr, you’re evil, I’m gonna dish out some justice” kind of guys. (His bodyguard was also a tyrant rep, but don’t worry his excuse is that he was a good kind of evil guy.) Yeah he just attacked us, not for infamy, but because we were villains. I’m over that now because it happened nearly a year ago now but yknow.

Why the hell y’all still playing this game 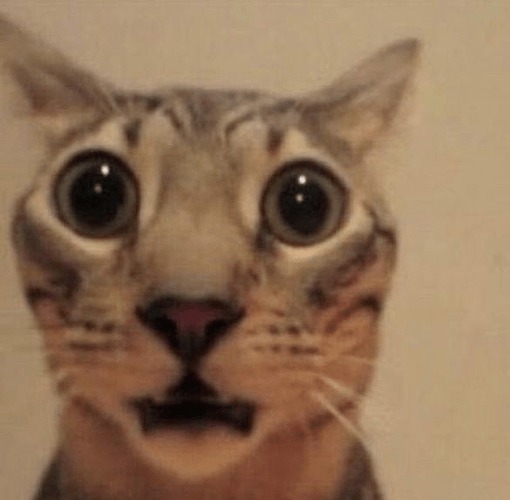 Were you in a guild? And when did it happen (makes them even worse if you were guildless)

yes i was guildless at that moment, and i forgot when happened but some time ago (Around a month ago) i realized he killed because just right when i got back i saw him.

left 2 mins after he killed me, literally he joined killed me and left