So.. Minotaur isnt minotaur.. but just a regular person 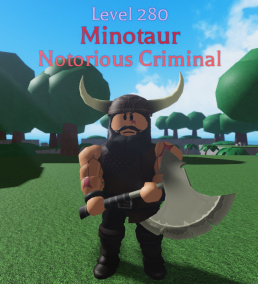 ALSO 280 HOLY CRAP lets just hope he isnt THAT hard… probably is rip
3000 health according to that gif sooooo gl guys
200 damage with that jump attack
300 on dash
for any who dont know everything he has can be dropped, his armor and his axe

why would real minotaurs even exist

Vetex wearing the full Minotaur armor in the first gif gave him about 941 health so i guess that means the armor might be pretty good. that iff vetex did not put enchantments on ti

We will cheese with distance

https://www.youtube.com/watch?v=Lf0rtjTUPWU nah it dog posted a vid of him fighting it. It won’t be hard it will just be frustrating and time straining ( that rhymed

id just hit him and go to the nearest magic council outpost.

He is part Vastus so just not a regular human

Are there elves in WoM?

Yeah, I am actually one.

I like that it’s not a real Minotaur. It fits the theme from AA.

King David Silver is level 500 and you don’t even need to try that hard to clap him anyways. Like, that level is the a bit lower than most magic council captains. However, I do want to know what magic he would use. By the looks of it, might just be Earth. And if it is going to fit the theme of AA like Kraken and being a boss, there’s a chance he may use some lost spells as well

He doesn’t use magic lol. He uses strength only

He has an axe

So all you really need to do is stay in the air then? Because it seems all he can do is charge and slam his axe into the ground, and can’t really do anything else since he doesn’t have a magic.

Did you see Dogs video on the Minotaur?
the guy can throw his axe, do a high spin attack, kinda like the Sunken Sword Special Ability but even bigger
p.s you are supposed to fight him at level 60 with minimum gear, he looks easy for us now because we are level 80 and the Minotaur boss isnt meant for the level 80s

I didn’t know there was a video, I just saw the gif from the discord server. The axe throw does 125 damage, which is like 12 seconds of regen if you have 1000+ health, so all you’d really need to do is just keep your distance and snipe with beams or single blast spells