Hey, There this is the Leader of The Fallen Guardian’s xXTaruXx, I have never once made a death threat ( What I am referring to is this particular link Spearbreakers :frcrying: - #2 by bikbok ), I am a college student, who normally doesn’t have enough time to play certain games, so I had decided to spend a little bit of time on World of Magic taking advantage of Corona, I had once killed multiple people in the Spear Guild, due to the fact of them farming my account for infamy once before, I had done a infamy exchange for double the amount they had farmed me for, I had farmed them back with ease, it seems that they had decided on their own to ridicule someone like me who’s specifically made their guild for roleplaying, and raiding, making up lies, and making me specifically switch server’s ever so often hunting me on the regular, while I train almost everyday for a set amount of time.

It seems like there are multiple trolls, trying to tarnish The Fallen Guardian's Name. -because we are a role-play, and raiding group, It’s quite bothersome, but who said we’re gonna give up, we’ll push through, and make sure that we’re prepared, because we are better then those who
seek attention, and excitement in ruining other people’s day’s with due time, we’ll make our guild one to remember throughout the history of Arcane Odyssey.

I am sorry, if I have caused anyone trouble, with the current ranking system’s, Ganking is one of the only option’s to rank further up the ranks, I’ve always tried to put a rather good impression on other’s, I wanna be someone to look up to, so I created this guild during this particular week, as I had felt proper, and somewhat considerate, I had looked for other’s to join my guild, instead of solo’ing infamy so I could create a community that welcomes anyone in it’s path except other guild member’s because this could attract spy’s and other such unwanted attention, anyway I hope whoever is reading this has a great rest of their day.

I understand that most people don’t generally care, and I know it’s just a game, but I honestly just felt the need to post it, and clear thing’s up with people that do care.

I mean really, after doing a bit of research, I eventually found out most of the people that are replying to this forum, a majority of them, are troll’s, and try and put down other’s, doing whatever they can to misinform the people who visit the forum’s, if I’m being completely honest, I’m done with this forum, because most of you aren’t exactly understanding the fact that “I Just Created this Guild this week.” meaning I wiped the floor with spear THIS WEEK not any other day just to clear that up.

I only played WoM once before 4 month’s ago and that was for one specific day, when I thought maybe I’d give WoM a try, and ended up not really liking it, so I came back to it because of a friend wanting me to play with him, and ended up falling in love with the game playing everyday for a week ( THIS SPECIFIC WEEK ), and I did wipe the floor with them ( Spear with ash magic ^-^ ), and they had their fair share of hunting me and the rest of my guild, I mean honestly does it really even matter if you combat log, I don’t think I’m the only one who thinks, I’m just not trying to lose some infamy over some particular idiot’s trying to kill me just because I intended to kill them back, and succeeded so excuse me for trying to keep the contribution that I’ve worked hard to keep, and withhold, and honestly even if you don’t want to admit your mistakes, and failures, I don’t really care if you do or not, because that’s on you, and you can believe what you honestly want, I’ll just go on with my day like I normally do and really if I’m being completely and utterly honest I’m just rather surprised a top guild would try and hide the fact that they misinformed other user’s about information that wasn’t valid one bit at all, and go ahead, and target a smaller guild after not even checking thoroughly that the information was true or not, just because of the fact some people had started some rumor’s about me I’ve had to go through hell and back, and now they personally call me random name’s, and say I’m bad at pvp, when they’ve either never fought me, or caught me at a bad time, where more then one guild was either coming after me, or 5 OF THEM rushing me.

Also I personally have no idea who “Human” is trying to say he particularly own’s the guild, or is the guild leader, if your gonna pretend to be someone your not in this case me then maybe think about actually spending the time to learn to write like him. ( Me )

Anyway, I’m officially done with responding to this forum, and to the person that said I’ve gotten mad from being ganked for Spear, not exactly, I’ve ganked them back to even the share WHICH I DID.

The Fallen Guardian’s what?

I had farmed them back with ease

Cap ur shit at pvp

Neither sides were good at pvp

I have no idea, who you are, but you can think what’d you like, I’m mostly trying to fish and gather item’s for the future update, to trade with other’s, I tend to gank like the rest of you, and have only been playing for a week, obviously I might not be great at pvp, but I’ve been told I am a god at it after getting familiar with the game after not playing for a rather long time.

I’ve fought you before your shit at pvp. I doubt you fought spear in a fair fight. You’ve been playing longer then a week bruh

Another guild drama, oh I need a large bucket for this one! 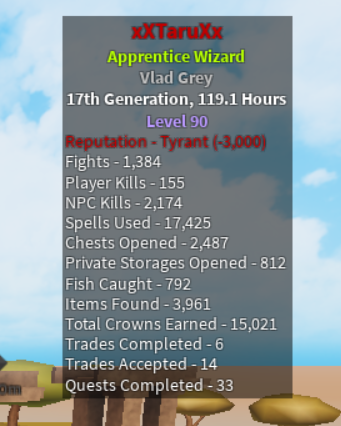 Thats 4 months ago bruh you high?

Lmao dude you’re stupid. Each gen is literally one month. 21 - 17 thats 4 months. And here is the toxic dickhead I already knew about. Nice

You showed your generation on your image dumbass

his hours only count to about 4-5 days of gameplay

Still been playing for 4 months. I didn’t say what counted towards his hours. But yeah playtime e its about a week.

rather than playing for 4 whole months, its more of playing scarcely across the span of 4 months

-because obviously you don’t understand how easy it is to create an account and forget about even making one, I told you I was specifically getting back into it, I haven’t been playing for 4 month’s you total retard…

If you haven’t, you’d have no way to prove that anyways. (after showing a 4 month old file)

Bruh when someone asks how long you’ve been playing they mean when you started. Toxic dumbass

Would not be surprised if you’re an alt farmer, you’re an incredible dick and honestly you fit right into the type. Now please move your egotistical ass off the forums, thx.

if you wanted to ask someone when they started playing you’d literally just ask “when did you start playing?”
cant really blame him for taking the question “how long have you been playing?” in the literal sense

I guess but the way he reacted lmao. Shows his true nature