They called him a madman for this

So it looks like we’ll be getting love potions in AO. Seems like a pretty funny gimmick mechanic, and the potion gets stronger at higher tiers until it reaches “death do us part” levels.

But this feature reminded me of something I’d seen here on the forums from a long time ago… A post that got hated on because the idea of it was so out there and laughable: Who knew that he was only predicting what was to come. In the end, he wasn’t the villain; he was just misunderstood. 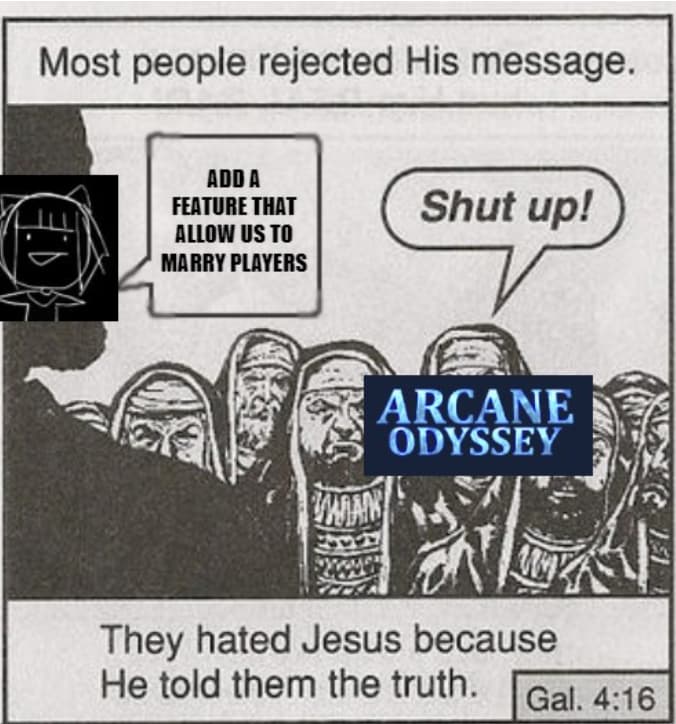 (for legal reasons this is a joke)

people making “fanart” of their rival under the affects of a perfect love potion:

The marriage system has been a thing in many MMORPGs.
I wouldn’t say that I wouldn’t be surprised, it’s just that it’s fairly mainstream for an MMORPG to have one for some reason.
Some of them even give you the ability to adopt other players as your children.

Wonder how easily a couple can divorce if this does get in.

dont bring that shit up ever again

nobody gonna use potions so eh

Lmao that’s wrong, why not use an entirely fleshed out part of the game thag benefits pvp? Incredibly stupid assumption

deepwoken has a potion function that barely anybody even uses.

AA had a potion function barely anybody used.

Cause you had to buy them, and they were used a fuck ton whenever people had them, they were just too rare to be consistently used
Plus why would vetex spend weeks on a feature barely anyone would use according to you? If you’ve seen the full list it’s definitely been expanded to the point where it’ll be useful even if you don’t use it for just pvp

he is a legend

Plus why would vetex spend weeks on a feature barely anyone would use according to you?

my brother this is vetex we talkin about. get your mind straight not your thoughts late (clean ass bars). Quit tryna argue with me when you know even YOUR ass doesnt use potions in games when viable

AA never had professions, AO will.

To say that no one will use them because people don’t use them in other games is the most stupidest argument I’ve heard to date. Every games mechanics are different and while they share the name “potions” they all are mechanically different.

While everyone in the game is using it to buff themselves, I best not see you in game using the “stupid mechanic”

deepwoken has a potion function that barely anybody even uses.

I love potions in Deepwoken and there’s even an entire guild for it, but it’s sad how the devs made potions need a completely gutted stat to work well.

But the main difference is potions in Deepwoken are tied to a stat build that is far from meta while in AO you can make potions with any build and it wouldn’t change anything.

Of course only a few people will have entire builds with throwable potions as a main-ish weapon since it’s annoying to use after farming so long for it but things like Luck, Water Breathing, Shark Repellent, Power, Love, Warding, Healing, Clearsight, Insanity, and hell even Invisibility would be very useful.

Healing, shark eyes, water breathing, and shark repellent were really helpful in AA and AR which should be proof enough that they’ll be viable

this i can agree with yeah, a lot of the time potion mechanics just dont work out that well, and its based ENTIRELY on a support feature with no real way of defending yourself except chucking bottles at people lol. So I agree with this