Was just looking around the trello when I made a realization 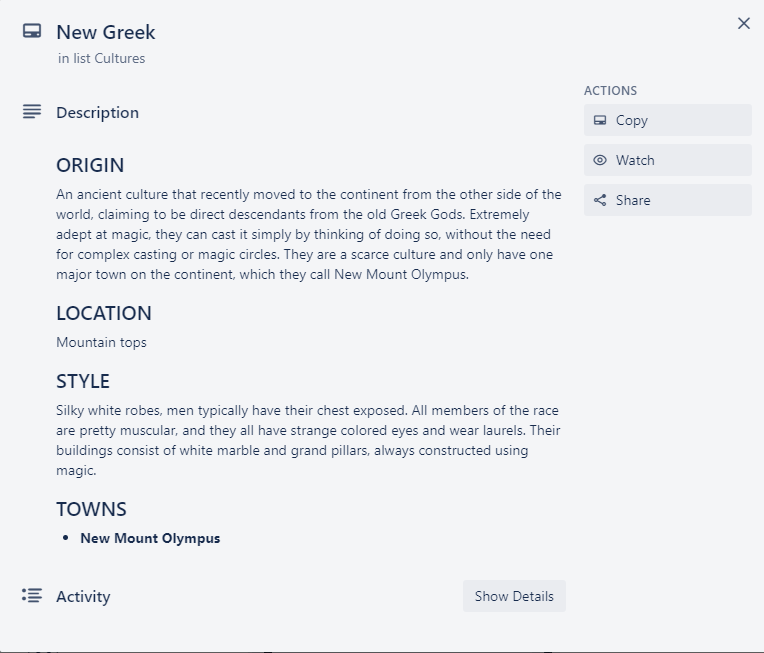 New Greeks764×653 28.4 KB
So the New Greeks (Who were supposed to be the people at the other end of Magius), had definently came from the War Seas. We know this because it says they are from the other side of the world. They are also extremley adept at magic. Maybe because of all those wars 2,000 years ago?
What was the thread where a forumer made a discovery that the new greeks where from the war seas and knew about magius or something like that?
StarForDays February 3, 2021, 1:01pm #2

Wait, then that would mean that they had to know of Magius’s existence first before finding it which means in AO there’s a possibility that maybe the War Seas figure out the existence of the 7 Seas or even they figure out about each other’s existence. This could just pertain to maybe just a group of people who know who are from the War Seas or maybe even way more then that. Could that possibly mean we will get to see them figuring out of the 7 Seas existence while in AO?

Well they may have discovered Magius but maybe not the seven seas. There still is the possibility

The New Greeks came to Magius claiming they were the descendants of gods, doesn’t mean they went back and told all of the war seas, I can predict we might see them in AO tho

They’re adept with it because they come from the bloodline of the gods. “recently moved” probably means that they recently found Magius, they don’t have to know of it to find it.

On the Magius map, New Mount Olympus was located on the very northwest of the continent, making it one of the closest places on Magius to the first three seas. Here’s a map of the place with some arrows of possible directions that they could of used to get there. I did not put any possibility of them going through Magius to New Mount Olympus since that is highly unlikely to me. 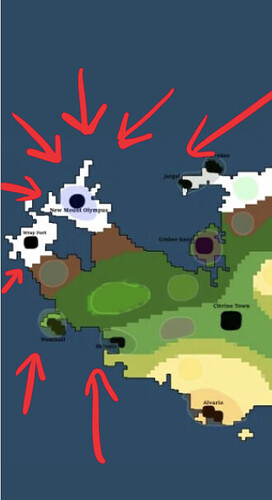 They could of went south from wherever they were but if that was the case then they would of purposely skipped all the land on the bottom of the picture. That would mean that they most likely could have made it to the through the top side to Magius instead of the southern side. Also, New Mt Olympus is also the place that is closest to the arrows of possible ways they could have traveled and then settled.

Now that we know that most likely they would of made it through the directions of the top side most likely, we can then assume that maybe one of these directions are correct. If you look at the first three arrows from right to left, they are all directions coming from the seas from Arcane Adventures. If they had traveled that path, then that would mean that they would of know about the 7 Seas or maybe just had seen some remnants.

For the last two arrows on the top side, that would mean that the New Greek would have traveled up north very close to their North Pope of their world and then continue until they saw land.

Any other direction that I have not discussed to New Mt Olympus would just seem very unnatural to take a path to Magius.

Even if you didn’t even want to figure out which or what path they chose to use, it would be pretty suspect that a group of people that are literally from the other side of the world just found Magius in their own. We even know that both the 7 Seas and the War Seas don’t know about each other’s existence so how come the New Greeks somehow traveled all the way to the other side of the world without knowing anything was there and yet they find Magius.

Even if they didn’t know about the 7 Seas’ existence, how would they even know that Magius was a place if they were all the way at the other side of the world. Also something else that was important, the trello says that they were recently moved. Magius has existed for a whole entire thousand years yet they just now decide to come to Magius, what for? Can’t be flooding unless it takes a whole entire millennium for the whole world to even out the sea level. That would mean that someone had to tell the New Greeks about the existence of Magius with knowledge that the War Seas exist with also having enough durability to travel all the way to Magius and to the War Seas from wherever they started.

Knowing this, no ordinary person could travel across half the globe especially with all the creatures of any and people on each side just to tell the New Greeks about the existence of Magius. I think that it had to be someone very powerful to have the ability to travel all the way to the War Seas with also knowledge about both sides of the globe. But to answer that question, we would have to guess who this person could be???

3 Likes
We finally know who told the New Greeks about the existence of Magius
New Greek Theory
ClashMaster273 February 3, 2021, 2:35pm #7

Just realized that Vetex needs to remove the cultures section on the Trello for obvious reasons.

we would have to guess who this person could be???

If there was someone that told them about the Seven Seas, it would be Averill, here is why…

Captain Averill was off on a journey to sail to the edge of the earth around this time, and discovered many lands and kingdoms on the opposite side of the world. He eventually sails all the way around the world, and ends up on the eastern shore of Magius.

This could only mean one thing,

What if there was another disastrous event in the War Seas that led to coming to Magius. We won’t know until the end of AO.

Or maybe they are still doing well in the War Seas and came to Magius for the fun of it. It makes sense because there is only one New Greek Town, New Mount Olympus. This could be because they are focusing on the War Seas. If there were to be a catastrophic event and they moved to Magius then there could have been more towns.

It’s most likely the Peacekeeper.

I don’t think it’s Averill cause there’s no implication he left Magius at some point after he arrived at the continent. PLUS, it says that the New Greeks came to the continent rather recently…

That could’ve changed, but I still doubt it was Averill since he was just passing by War Seas at some point and was trying to find the edge of the world at the time.

Peacekeeper suddenly appeared 10 years after they defeated Hades and got the curse in Magius only to suddenly disappear into the unknown again. It’s most likely PK was staying most of their life in the War Seas. Besides, MOST of the curses were there, which probably cause a lot of conflicts there too. So its likely it was the first place they went to fulfil their mission.

If the lore changed and the New Greeks DIDN’T come there recently anymore in the lore, but long in the past, I would say that it was probably the MC of AO, but that’s going into speculation territory.

Well there’s a good theory but another could be that their homeland got destroyed or something? We know the seas are at constant war and if their city was destroyed (possibly because the rest of the war seas know they’re adept at magic and descendants of gods) they would possibly try to escape. They likely couldn’t become refugees in other places in the war seas due to being at war so they could’ve just hoped there was more land in other places.