What do you think of this alternate WoM Map?

After seeing people debate about changing the WoM map into islands (I didnt get to read everything so sorry if I miss something someone else said), I noticed a few people were thinking of adding islands, however each island would be significantly larger than those in AA. I decided to try and come up with my own draft of a WoM map incorporating large, but few islands. 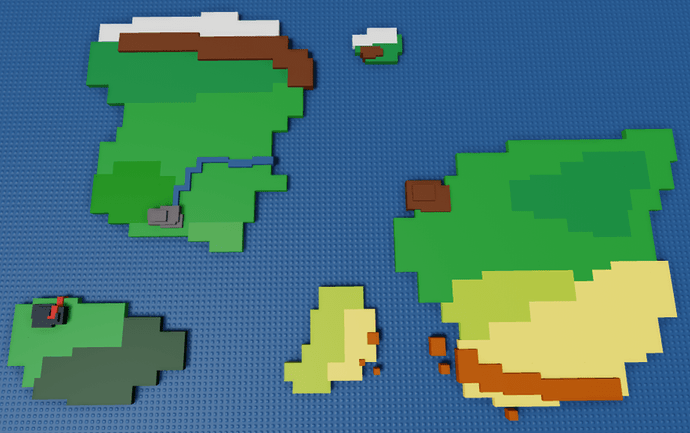 Just want to ask, what do you guys think of having islands like these? With a large map like this we can travel and explore like we would in WoM. Unlike WoM’s map, however, we still have the ability to use ships and have battles with them. Ship transportation would still be most effective when travelling between islands or along coasts, however on land we would still rely on flight spells or potentially horses.

Keep in mind that this map is simply a draft I spontaneously made and Im not suggesting that Vetex add this specific map, I just want to see how the forum feels about this kind of map and potentially he could adjust his own idea by the response of this. Also be aware that certain details are missing such as towns and structures, as well as some rivers and other features to make the map feel less barren. Also, if you have any suggestions for how I am can improve this particular map, Im open to those as well.

I just kept those so people have a slight sense of scale of the islands and their proportions, but if the thought that the world is lego pleases you then I will not stop you.

If volcano is going to be its own island, it should definitely be bigger imo.

Volcano wasn’t meant to be its own island, though a volcanic island sounds interesting. I’ll consider it once I make the second draft.

id like to keep the map the same, but add islands like these to one side of the continent (or around it).
WoM shouldnt feel like an AA remake, but there’s nothing wrong with being reminiscent.

WoM shouldnt feel like an AA remake, but there’s nothing wrong with being reminiscent.

The idea with this map is that it wouldn’t exactly be an AA remake, but similar in some aspects. Sure, there is plenty of ocean for boats to travel in, but there is still plenty of flat and expansive land. Lower levels would likely stay on the island of their home town but once you reach later levels you might be bouncing between islands more often and fighting higher level players in naval battles.

I want more island, other than it’s pretty good.

did you make this in roblox?

Yes, all in Studio because Im used to it.

I balanced it for you.

I would prefer if the map was just bigger, but there were like HUGE rivers once in a while

not the entire map being fragmented