What's the language you find in some secret areas?

You find that secret language if symbols around the map sometimes. What is it? Such as that statue of the dude with the giant axe on mount sea watch.

well some people already decoded it
but they didnt leak it

so rn its gibberish for us

It’s the “ancient language”, it’s just english with different symbols which makes it possible to decode
Lore wise that language is extremely old, it’s only found on ruins that were risen from the sea like 1000 years ago, and that’s not even including the time they spent underwater before that

Is there anyway to decode it? Did they leave any hints or is just suffer in the dark. Do we just have to go on one of those sites that tell you the the word it could be based on the number of characters or?

its just english with different letters, meaning you can translate it relatively easily if you try
publically leaking the language is against the rules granted you can ask someone who does know for the translation/hints

it’s the ancient language, some people have decoded it as far as i remember

I was able to decode it pretty easily on my own.
Not going to leak it because it’s against the rules, but here are some pretty significant tips:

These two pictures along with a picture of a magic circle in-game were all I needed to do the work: 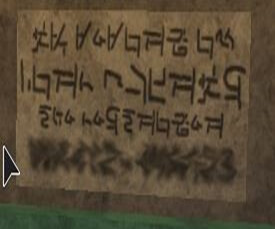 Either that or just ask someone privately for the key.

That’s a way smarter way of doing it. I just used a substitution solver website.

I just can’t figure this out. Is there anybody who you know whos willing to leak it to me in a private dm or anything?

i think if you’re looking for it privately you should PM someone, might be more effective