Who’s the best person/forumer on the forums?

For me, it’s probably @Divanochi, @liu, @Broly, and @AMultiversalEntity. How about you people?

Me??? What have I done to deserve such an honor?

I’d say Cryonical, Divanochi, a_nerd, ThatOneGuy, Ezia, Vetex, Tobi and Randomness.
But if I could only pick one person it’s obviously Vetex since he is the developer of the game, also without him we wouldn’t all be here.

There’s a lot of good ones

Off the top of my head I’d say Cryo, Meta, Broly, Star, Liu, ThatOneGuy, and others

Me??? What have I done to deserve such an honor?

he’s a newgen anyways he doesn’t know many people.

real talk though
@Meta is an absolute bro 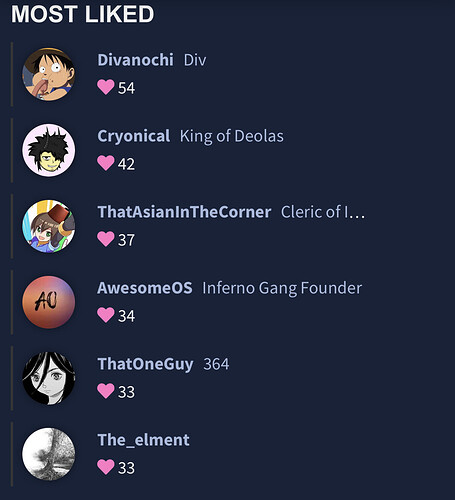 these people i suppose

my name has been finally been stated in either worst/best forumers, i was waiting for this day, truly fate has graced me this day indeed yes

Cryonical and ThatOneGuy are the best, though I have to mention Baba and Ultra, they cool.

RIP WAX, they are missed.

Cryo, tobi, ThatOneGuy and many others

so many regulars i’ve literally never seen, how times have changed

hyped to be back (hopefully) for ao

You are the only one that likes me apparently lmfao, is it because you admit Mind Magic is superior to all other magics ?

Nah you’re just fun to talk to to. Mind Magic is cool though.