Why I think this tag should be added!

Now, I think we all know about the rise of rant posts recently on the forums which is why I think that there should be a tag added for it. Rants do most of the time cause discussion about whatever the topic is about so I think it’s important to add it so when people go and check the rant tag, they’ll go, “Hey, let me put my input on this!” or “Hey, let’s cause some chaos!”. Also in some posts, rants aren’t acknowledged unless they explicitly have the word rant in the title or has a title that may sound like a rant. With this tag, it’ll be easier for people to understand which posts are specifically rants so that they can either look at the post or just stay away from it.

This tag would only be accessible in the categories of #off-topic , #game-discussion , and #guilds as they are topics in which a lot of rants take place. Examples of this could be rants about the game, certain guilds, or even a rant about something random in Off-Topic. I know this post isn’t the highest of quality, but I still think that this tag should be added.

So this isn’t common knowledge, but you can make your own tags:

They have to be 18 characters or less, but you can type anything into the “Search” bar and click on the tag.

They might be restricted in some categories (#suggestions maybe), but you can make your own tags almost anywhere on the forum.
The reason our question tag is question_ is because the first person to use it made a typo, and everyone else copied that tag. 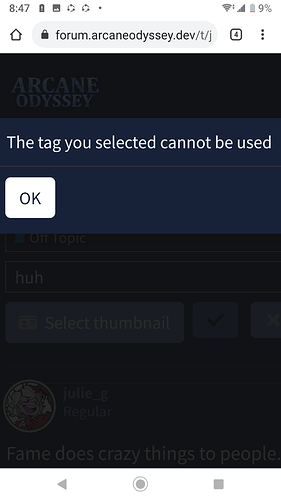 I tried putting a new tag into my posts, but to no avail, this error message happened

could off-topic be restricted of tags similarly to suggestions?

pretty sure it’s TL4 and above