If your video had an abnormally large number of views from accounts that weren’t signed in, they’ll get deleted. Did you sign out of youtube and refresh a bunch of times to get the view count up? If not, I don’t know what happened.

Probably some algorithm change or something

it should be back within a few days

bro its not that one its the story mode one bruh

and its not funny even though its funny

Any roblox youtuber’s content is going to be bad.

i do minecraft too tho

Its simple they committed UNSEE

it happens all the time. 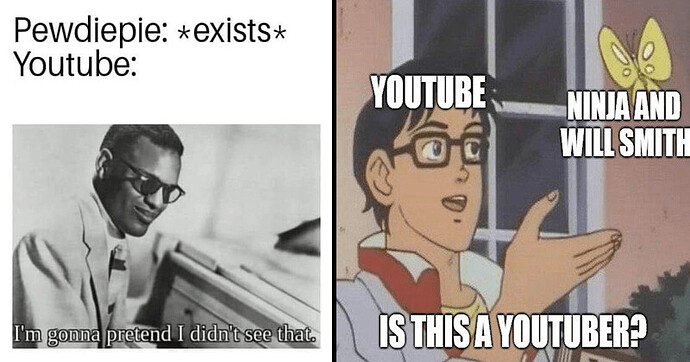 Assuming that meme is referencing YouTube rewind, YouTube is trying its best to disassociate its brand from PewDiePie after the thing that happened a few years ago.

Reason being that T-Series is a company, while Pewdiepie, Ninja, people like that, are small groups of creators, or solo creators themselves.

the reason is that PewDiePie is an antisemite.

What does this even mean, did u misspell antisemitism?