Berserker - Everything YOU need to know 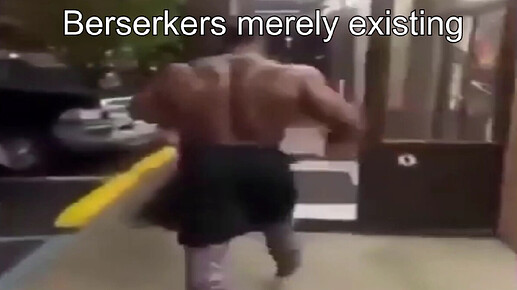 How to become The Berserker

Now you really have several options when putting your stat points together. You can go with magic

or perhaps maybe even weapons

but the honest to God ALPHAS of AO will put their points into Strength, the definitive best stat (despite us knowing fuck all about it).

Now for each level you got two points and at the very least one of those points must be dedicated to Strength and Strength alone.

You want to dabble in magic? That’s fine, a bit of a loser move but nothing that can’t be fixed with some shoulder strength. Maybe you want to use weapons? Guess what Brass Knuckles are ideal weapons for someone strong but I don’t wanna catch you using a katana or some crap.

Savants are not included, while it is pretty alpha of them to put points into strength they did not put enough into it to gain the benefit it provides. Should a build be also a build for two or more stats than it doesn’t belong here. Go all in or go home.

Why do I need these points?

Simple really, to use the most unknown means of offense we’ve got side from the Warden’s fucking spirit swords. Look; we ain’t got much knowledge on how they will be so I’m going to do a little trolling and say to have faith here.

Fighting styles are going to function very similarly to magics and in that regard I’m sure they will have their own ultimate arts/techniques, a level cap for each skill, yada yada that those Mages have. It’s a similar system.

But overall fighting styles are going to require something to acquire them. You’re not going to spawn into the game with Thermo Fist or Knocking Fist, you don’t just start off as a Karate master, you gotta earn that shit. Some of these requirements, if not all, are going to be strength. So if you want to use these secret fighting styles that NO ONE has ever seen yet then you need to pump some iron. Capiche?

What’s the benefits of Berserkers?

Your damage isn’t linked to a bar that doesn’t refill by itself. Mages need to take time and focus to recharge their little meter bar while Strength users can unleash a constant fury of blows should they be able to manage their stamina. I, as a current non-magic user in WoM, have learned how to just do this. It ain’t a hard skill to master and the benefits outweigh any kind of cons.

Additionally you’re going to be able to get five different and unique fighting styles, what’s more is that they can be upgraded. Yeah those magic fellas can’t turn their Fire magic into Flare, they gotta find a scroll to teach them that. While fighting style users can instead upgrade it. We don’t know how but I mean aside from names and vague descriptions what do we know about fighting styles.

Here are the awakened passive features that you get for investing in strength:

Berserkers are nothing but ALPHAS and the dominate force of the world.
also thanks @Archipelago for inspiring/being a template for this

Will YOU join us?

I seen your message on Archi’s topic and figured you’d also enjoy this.

I need to continue spreading the truth

I’ll make a warlock just for you

tbh i’d rather the 2nd awakening first for this. i can live with just acid and sailor fist for a while but i want those hybrid effects

Listed their total benefits from the awakenings card in trello, not just the ones we’ll get on release.

@Archipelago they took your thingamajig

meh it’s alright, better for the biased people to make it anyway so it’s more like propaganda lol
(bc Archi is enthusiastic about magic more than any of the other classes and ThatOneGuy is the same for berserker)

Berserkers may be alphas but savants are sigma males, imagine going “all in” that’s the key to getting bored, go all a little or go all a nothing.

i was going to do explosion/ash/wind mage on my explosion file, but i just realized i could do paladin and then have one of every magic hybrid, with just explosion/ash and a sunken size build

You don’t know that after first awakening all builds will require energy, you are truly out of the loop

Better to manage one bar than two, or even three. 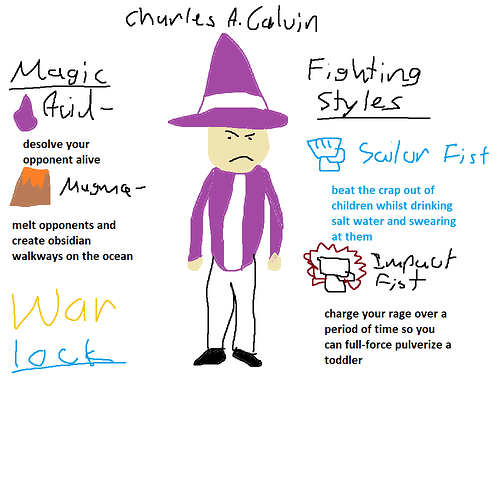 You can’t have 2 fstyles and 2 magics

wouldn’t lost fighting styles work like lost magics tho? where you don’t need to get an additional “another magic” awakening to get one