Is RKing an Issue in WoM?

So recently I made a post about fixing RKing and allowing PvP to truely reveal itself as a core feature in AO, as well as trading but that’s off-topic.
However, I made it sound too much like a suggestion that it got closed, not a big deal, BUT, inferno said one thing I disagree with 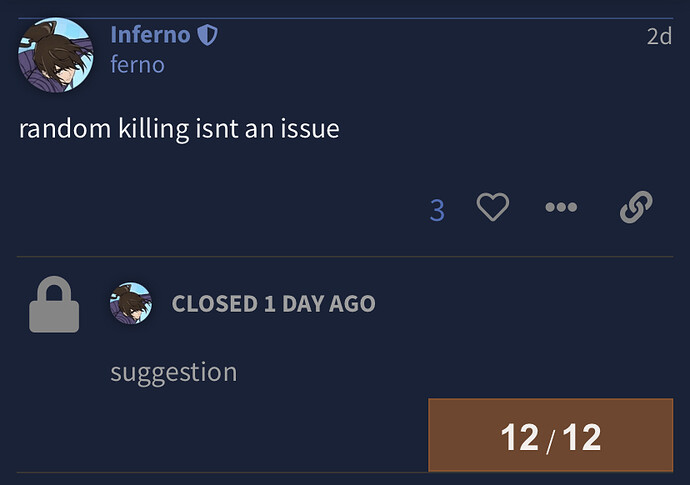 I wanted to ask you whether RKing is an issue or not. Personally, I’ve experienced TONS of RKing in WoM, but not in other games that have specific places to PvP other people, who want to PvP.
Also here’s the post if you wanna read it

Random killing is a problem in every game, yet it has a simple, easy fix. Trading over a website instead of in-game leads to a lot of miscommunication and time-consuming, slow deals. I have a fix for both of these issues, not only will it make the game re-playable, it’ll allow newer and younger players to enter the aspects of trading and PvPing rather than making these two, in my opinion, essential features, be outside of the actual game. Battle Hub I’ve been playing World of Magic for a lon…

the only rking does is annoy people and is only a big deal if you’re in guilds (which you essentially signed up for anyways so you shouldn’t complain of course). outside of that it isn’t an issue just server hop if it gets bad. or be like me and die hundreds of times to build up skill in some form assuming you aren’t in a guild or just straight up don’t care about infamy.

the only thing you’d lose outside of being in a guild is some crowns which can be annoying and time. which time isn’t a big deal since you’re probably already sinking hours of gameplay a day or so regardless.

(if they’re continuously following you after serverhopping that is a yikes and might be bannable soon or is, idr, was like that in aa i think so would make sense for ao to have it)

Yeah being in a guild makes it 10x worse, but even without being in a guild I’ve experienced tons of RKING due to players being straight up bored for their life
Read the post I linked to this post if you have time, it explains my entire thought process

rking isn’t a issue unless the person rking is rking low level users.

it doesn’t matter, nobody is going to “fix” rking. if you play a pvp game like wom then you should expect to get rk’d. You basically sign an invisible contract that allows literally anyone to kill you when you first JOIN the game.

Also suggestions arent allowed, and designated pvp places would kind of ruin wom/ao so its just a terrible idea in general

Stupid ass question tbh, If your playing an adventure game/story game it would just be stupid in general to add DESIGNATED pvp areas. At that point it would be no better off then a simulator.

It would also make infamy grinding near impossible

Huh? Ofc not bruh, all it does is add a replayable feature in the game that only brings good the game, literally it just makes the game better, has almost 0 downsides.
Look at loomian legacy, still has 2-3k players even though their updates take longer than Vetex’s in WoM and it’s because of their battle coliseum with rewards and etc

Infamy is being completely revamped, it’s not going to be completely PvP, plus, it actually makes infamy grinding better. People who want infamy hunt others who also want infamy, people who want to regular PVP go into the arena
Will make infamy harder to get, guild vs guild

No it doesn’t if you add designated pvp areas in ruins the adventure part of the game, and this is literally an adventure game. If you were out in like, the middle ages and got attacked by vikings you wouldn’t say, “Wait, you can’t attack me here! Fights are only allowed in insert place here”

I never said PvP wouldn’t still
Be allowed in main game, I just said there would be a place mainly FOR it. Plus it wouldn’t be unlocked right away, probably near max level

I’m suggesting anything, I just asked if RKing was an issue and why an arena would be good yk

Battle Coliseum is a place mainly used to pvp in wom, If your say its MAINLY used for pvp there would be no point of asking about this idea in the first place since its already pretty much a thing

That wouldn’t solve the “problem” of rking if its just MAINLY used for it, you can’t have a pvp game like this without rkers its just not gonna happen. If you get rid of rking you get rid of the adventure feeling of the game which pretty much ruins it

RK doesnt add to adventure, it ruins it and makes it hard/annoying.