Lore Trello for the Arcane Universe

I’ve been writing this for the past 2 or 3 months and it’s finally done now. I use official sources and have tried to make my information as accurate as possible. If you have any suggestions, find any incorrect information or grammatical errors, or if you have some information you’d like to contribute, let me know. Enjoy and share the Trello with your friends if you think they’d like it!

P.S. Trello shows when a board has gone through unseen changes, but gives no indication as to what text has been edited. I don’t want people to go through the whole board again trying to find what’s new, so I will be replying to this post with images of everything new I add. I recommend watching this thread so that you receive notifications whenever I send one of these updates, that way you’ll never miss out on a new card or a new set of lore facts.

I’ve read one section, and I love it! Thanks for putting time and effort for something easier to read than a google doc.

Thanks, I really appreciate it! I’ll continue updating the board more once Arcane Odyssey releases, can’t wait to add all the new stuff from that.

I like to imagine the Big DMs with Tech

yes but who are you?

edit: nvm the trello is based off webcomic
but still

i know
i was wondering why they assumed he was though (on the trello), or who told them that he was 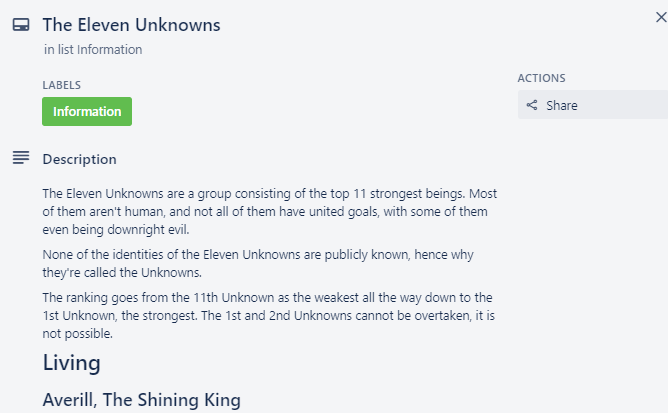 Trigno also wasn’t. Creation should be #2

Huge congrats on finally completing this big project! At least until more lore gets inevitably added in AO lol. It’s been super enlightening reading it and I’m definitely gonna re-read it a bunch.

And here’s some extra info on the Unknowns that Level already brought up, thought it’s a bit old so who knows if it’s been retconned

As for Averill and Trigno being Unknowns, these were from the character lore facts card:

What are all these new rare Magic’s, source pls

so its more of a technicality
then again

I’ve known about Torren’s placement in the eleven unknowns for a while now, but I haven’t put it on the Trello because it’s something Tech would rather keep secret. I try not to put secret stuff on the Trello, Tech was kind enough to answer my 1000+ questions so the least I can do is not leak his secret lore.

As for Creation, I’m honestly not 100% sure if that’s even canon anymore and also I’m pretty sure Creation is also meant to be secret.

Thank you so much for supporting the Trello for so long! It makes me really happy to hear that you and many others enjoy it.

I’m not sure what you’re talking about exactly. Arcturus is a magic from the Arcane Adventures Webcomic, Arcturus isn’t canon to AA but I’m keeping it on the Trello because the comic is technically still a piece of Arcane lore and it’s nice to have info on it.

Yeah, even though they’re strong enough to be Unknowns at the time of WoM, they still don’t seem to be near the level of the same number Unknowns during AA