Could the Magic Council be the antagonist? Wondering this so I can consider them as an option for a story.

Antagonist is pretty vague, wym?
are you talking in the sense of bad rep or good rep?

I’m looking for if they are sketchy. Would they torture? (Even if that can’t be in-game) Any secrets they are hiding especially from the people, not just us–the players.

I mean having 3 guillotine at the top of Silent tower is sketchy to me, 3 seems like a lot

They can definitely be an antagonistic force, outside of good and evil rep. The Magic Council is clearly not perfect when you see some of the in game text Re:Council. They are a force for good, but just the fact of being a force means you step over anyone whose needs from the world are different.

EDIT: I was reading a Captain’s dialogue and it went something like “We need discipline to keep them in line,” so even if they’re on the good side, magic council members don’t necessarily exercise power in uniformly ‘good’ ways. They represent Order, basically, they’re cops.

EDIT 2: If the Magic Council is so good, then why do they see fit to blow up entire cities for the sake of 1 criminal? Why do they drive poverty striken people into banditry?

Hmm ok thanks everyone! 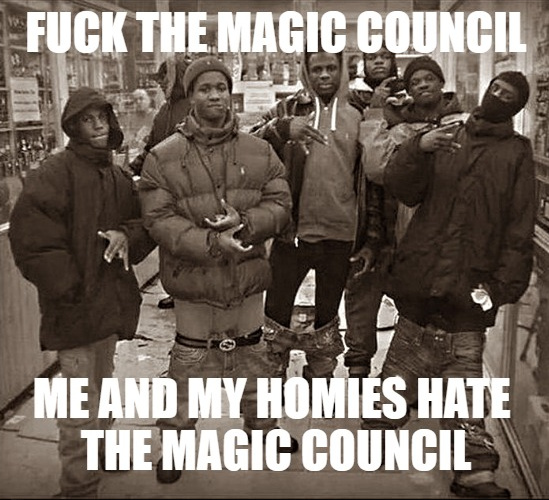 Antagonist doesn’t mean bad. Anything can be the antagonist so long as it opposes the protagonist.~~~ Let the creativity flow ~~~

Edit - Oh I saw your comment asking if they seem sketch. Answer: Still yes, much sketch, you have dark npcs that state that they didn’t want to be evil, you have a gigantic prison tower at the center of the map overlooking everything on the map so far guarded by an endless army of skilled mages, you have guillotines at the top of said tower. Something seems a bit off about them in my mind, and if you want to write a story, you got creative freedom. I maintain my position:
~~ Let the creativity flow ~~

Edit 2: Oh, forgot to mention that the hero npcs don’t protect the tower or camps, but live on their own doing their own thing in the middle of nowhere.

Magic Council are the good guys no cap.

they do more harm then good. it’s like they try to hard to be good, but in the long run they just fuck things up

they can be an antagonist even if we are the good guy, MC are basically a cop and some of them can abuse their position and power, althought not as corrupt as AG that doesnt mean no one in MC isnt corrupt

Here’s my opinion on it that no one asked for; the Magic Council are definitively the good guys. They aren’t perfect, not by a long shot, but I say a majority of them are legitimately there to serve the peace.

Without the Council, it would be total mayhem. And if we had something as corrupt as the Arcane Government, nothing would be fair. The Council is the best outcome because of how it supplies. They actively hunt criminals and don’t let anyone off easy. Even good reps will get fined if they damage anything outside of a threat. They’re strict, yes, but they’re fair.

considering that every city is forced upon the watchful eye of the magic council and considering later on there is going to be a quest on the trello called “dreadnights” where there are going to be cities trying to gain independence but that is squashed by the magic council (also come corruption with the main people in charge but that’s just a bonus with my point). i don’t think the magic council are good guys whatsoever, they got propaganda posters everywhere in the city, force people to live under their rule, and are pretty much cruel. i think this is why i don’t find them at all as good guys, they are just authoritarian douchebags

OK, but how are they cruel? I think they allow wizards only simply because wizards hold so much more power then the regular man and lives for so much longer. This allows them to be much more competent not only in battle, but also for tactical decisions in all aspects. And every city is “forced” under their protection because the law needs to upheld. It’s not like these laws are demanding or cruel. They are simply there to serve and protect the people.

And I’m gonna answer the most common response I see in regards to anti-MC, yes they destroy the cities. But it’s not very easy to kill a magic user (the typical threat) with just basic weaponry. They don’t have much of a choice, and I’m willing to bet money that the Magic Council pays for the damages caused by them. That’s the only way extremely poor towns such as Bell Village would be able to recuperate and why the towns/cities recover so fast.

i am gonna ignore the fact that the npcs destroy everything because i don’t think that’s supposed to happen, just a funny quirk of the game

they are cruel because of how they handle criminals and show off their power/dominance over the entire rest of the region. silent tower is the most oppressive looking building in the game and looks like it belongs to the villain lmfao. not to mention the fact that at the top there are a row of guillotines at the top like theyre the imperial army from skyrim. secondly they have a plethora of prison camps just scattered around the map where they just force you inside small, wooden boxes. at some point, their tactics and ways are inhumane and cruel.

a way that they are oppressive and authoritarian is that they will not accept anyone trying to gain independence from them. it’s like they want to retain that power and dominance over the entire continent for themselves that they send contract insurgents just to squash any rebellion. the “protect and serve” they don’t even follow because i am pretty sure their only goal is to just kill anyone that goes outside of their rule of power. the only people i see actually take down pirates or bandit camps are like bounty hunters or the players themselves. the only time they come out is if there are terror happening inside of a city, outside of the city they don’t care because they only care about order. if they were to handle criminals outside of the city, then they will protect and serve. but the npc’s go to the player to take down the camps or criminals, not the council.

are you talking about like late story kinda antagonist? thatd be amazing for roleplayers and for players who’d like to use their time for writing some lore

basically we think of the council as the good guys but eventually we start to question their actions, and eventually we fail to persuade them to reconsider such actions and in conclusion we see them as bad guys

so it seems like theres a huge misunderstanding
the “MC” were never meant to be “good”, they are meant to be "order"

Executions were never meant to be “good” or “redeeming”, they’re made to get rid of nuisances and to send a message to everyone else to fuck off.

Some of the bandit/wizard dialogue mentions how they wished the MC would “help people like them”,
or,
“I want to amend my crimes, but even if I did, I wouldn’t be able to get a job”
meaning the mc doesn’t do shit in that regard, they’re a police force,

not some god damn comic superheroes for “justice”.