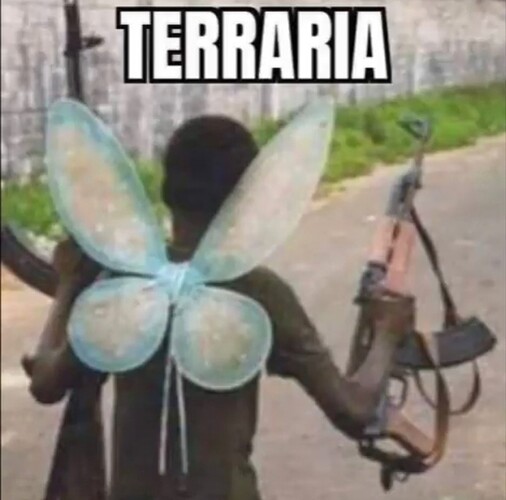 i can agree with this

You can’t really compare these two games; while they are both sandboxes, Terraria and Minecraft are quite different in how they work as games. To me, too different to really compare effectively.

Not to mention that they beat each other out in different aspects.

Honestly I’m probably just not able to pick one over the other here.

yeah i can agree
personally i prefer terraria due to its massive amount of content along and combat which pumps your blood so hard your heart explodes
but if you want to relax, you can play a bit of minecraft and just go mining or build stuff

I don’t own Minecraft. I don’t own terraria. I have played the demo of terraria. I have played a bit of Minecraft. All I have to say is, I feel like terraria is more adventurous than minecraft, but when you dont know what to do that gets boring. For Minecraft, that game is lonely if your playing alone. Like have you ever played it and the music comes on? It gets so sad and lonely and you start thinking about life. But when you play with your friends that sad music has a whole different feel. I have played more Minecraft than terraria cause the demo doesnt take you far

ah, rip
terraria is fairly cheap if you do wanna get it though
its like 7 quid for us brits on steam and you can get tmodloader without any major hassle now

If it isn’t free it’s expensive

terraria is definitely quite hard but fun if you know what to do, and it’s modding community has some mods better then the actual game, though you shouldnt try mods until youve beaten 1.4

i have the same issues with console buut, it isnt as bad for mc since i play mc a lot on console

both are good, still prefer minecraft
would rather move in a 3d space than 2d

I don’t think I can vote for one. I’ve played both and had amazing times, the replay value is insane in both.

Yet, I don’t play either anymore. The only way I’d get on would be with friends, or just other people in general, with the game juiced up with mods.
The times I had with both games were fun, but they’ve long since passed.

i can definently understand that, terraria gets quite repetitive and its takes a while for new big mods and major updates to happen
i would say to try out 1.4 (now 1.4.1) if you havent since it’s quite a new breath of fresh air, but if you have i dont have any solutions other then waiting for new content

i can agree, 3d spaces are much more easier to move in and have more space to do dodging and techniques without added mobility options like terraria

How hard is it to move the camera on console?

well, on terraria, on console, the controls dont fit the game at all (using joysticks to move in 2d sucks) but you can really move the camera in terraria anyways
in minecraft, it’s fairly easy as joysticks to turn and move are a lot better in 3d personally