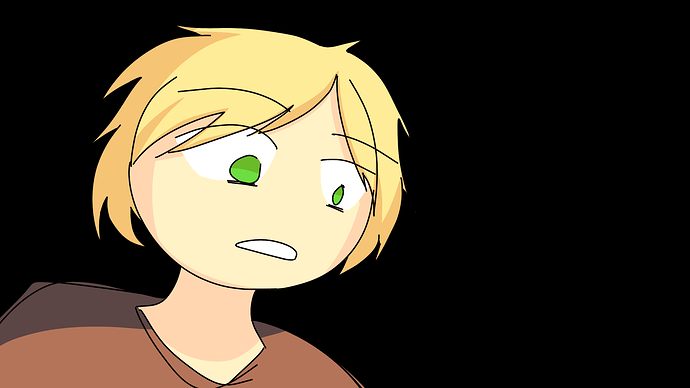 Carson’s desire to search for Crescent Squad’s clues and to find Markus again clashed…
Very well. This story can continue, either way.

Once it was morning, Carson hurried out of the bed and rushed downstairs, to find John cooking something over the stove—with a pan in his hand. Today, the kitchen smelled of spices Carson couldn’t name, yet it tickled something in his memory.

“What’s this?” Carson asked, as he stood behind John.

“It’s fried rice,” John replied, swishing the pan for one last time before packing the meal into containers. Each was marked with colors, and Carson’s was the yellow one.

While John was busy cleaning up the pan, Carson ate his first meal. Despite John’s first impression, his food was better than what he had during his bandit days. It felt more like home.

And someone rang the bell.

“I’m coming!” John yelled at the door, as he hung the pan over the rack.

And John headed straight to the door, opening it for Jane.

If Carson’s memories served right, she was John’s little sister. Her resemblance to John was there, but her words sounded much more pleasant. Either way, Carson didn’t bother eavesdropping in their loud exchanges, as he had something else to do today—ask Virgil about the crescent symbol, so he could start his next plan.

Once Carson was done eating, Virgil arrived home. He greeted both Jane and John, before heading inside to grab his food container—one marked with red. “Okay, Carson. Make sure the doors stay locked, and don’t steal—”

“Hey, about the whole crescent symbol deal… Can we talk about it?”

Virgil and Carson left the two siblings behind, as they head to the forge shop. A few fellow workers roamed around this place, and Carson didn’t know what to do here.

At the moment Carson was about to ask Virgil his first question, Virgil was already running around with his job—working with weapons and such. During his first moments here, Carson stayed behind, watching everyone else work.

While Carson was waiting for the moment Virgil took a break, his attention was caught by a locked box with a shiny lock. As he walked towards it, a blade tipped his neck.

“Do not,” Virgil warned, with the dagger in his hand and a glare. And he sighed, withdrawing the dagger away from Carson. “Bored?”

Carson nodded, wiping the sweat on his neck, and Virgil tossed him a bag. “Send this to the house over there, right next to the dock.”

After this request, Carson took the job of an errand boy for a while. Once the lunch break arrived, Virgil handed him a small stack of crowns, tied by a rubber band. “For today’s work.”

“Thanks. You know anyone who knows gang symbols?”

“Hmm. How long did you have that cloth for?”

“Since yesterday. John said he found it five years ago at his house.”

“Five years… Not too long for someone to write a record of it in Ironport’s library. Ask the librarian for the recent guild records—and oh, could you do me a favor? I need you to look for something in that place.”

“Look for the old studies section, and find The Art of Charms. Fifth edition specifically, no more or less. Just fifth.”

Carson nodded. “You want me to borrow it?”

Virgil then continued with his afternoon work, letting Carson head to the library.

As Carson stepped inside, he noticed a familiar figure talking to the librarian. Grey hair, small figure—he only knew one person who looked like that.

“What?” Ace turned to Carson, still maintaining his stoic composure like before. It was Carson’s first time seeing him outside of work, in his casual attire.

What should Carson look for first?

What the ace doin?
sorry i had to get that out of my system
New storyy woo