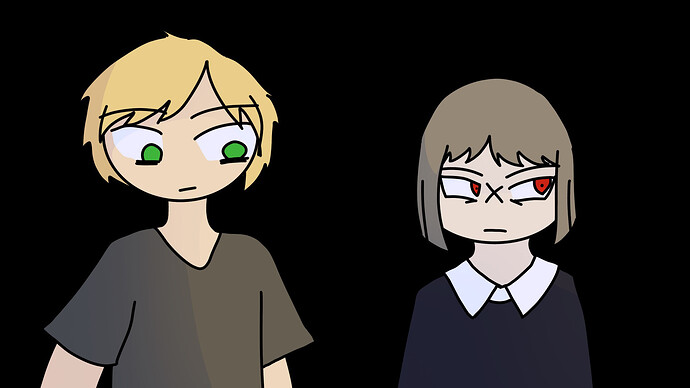 We meet again this week.

The last poll was a tie between searching for recent guild records, and learning what Ace was doing in the library…

Got it. The story can continue either way.

“I’m looking for the recent guild records. Where’s that?” Carson looked at Ace, who didn’t seem to expect him here—or at least, expect him to be some guy who actually visited libraries. And he had another question. “And what are you doing here?”

Ace talked to the librarian for a little moment, before turning back to Carson. “Looking for something. Which guild?”

“Crescent Squad. You know them?”

Ace nodded, before telling Carson to follow him along. And he stopped in front of a bookshelf, picking a book from it. Its cover was titled as expected of a guild record.

Carson looked over Ace’s shoulder as he flipped through the pages. “So… Where’d they end up?”

“Missing,” Ace said, as he stopped at a page. Its last line read the squad was nowhere to be seen, after this incident.

Carson’s eyes then skimmed over the page for the date—and he spotted the day he remembered the accident happening. That section detailed the attacks trailing from Ironport, Riverville, Silent Tower, Bell Villages—all the places in the Eastern Peninsula, tracing from the easternmost towards the northern—and stopping at the Bronze Grasslands.

Apparently, this attack was carried out by only ten people, and their identities hadn’t been pinpointed since then.

“Mind flipping back the page? I’m trying to see who these guys are.”

Ace flipped back the pages, revealing the details of the Crescent Squad along the way. It was an infamous dark guild operating across this continent, known for its methods to wipe people from history. They carried out their attacks once every few years, starting from roughly fifteen years ago. After the last ten years, fewer attackers were involved each time. Their motives remained unclear—though Carson noticed a pattern of the squad attacking guilds.

“You want to track their members down?” Ace asked, closing the record.

Carson nodded. “What about you?”

“I do—or at least, I have to. Care to visit my house later?”

Carson thought about his offer for a little longer. He wasn’t sure if he could trust someone who worked for Magic Council to handle this—they were known to be extremely slow with their justice-serving methods, at least from what he remembered.

But hey, there’s nothing to lose here, right?

“Sure. And you know where’s the Art of Charms book? Virgil said he’s looking for fifth edition.”

Once Carson mentioned the book’s name, he swore he could almost see Ace’s expression brightened for a second. He swore he almost saw him smile.

For the rest of Carson’s time in the library, he followed Ace around the place to grab the charms book, and to help Ace grab his books from the taller shelves here and there. Looking at the books Ace wanted him to pick up, they were either about magic techniques or law books. No in-between.

Before Carson could know, they had already left the library. As Ace walked towards a building, he noticed John’s house. And he went inside the smaller house right next to it.

He hadn’t figured out Ace was his neighbor—and his suspicions raised. Was Ace trying to use him?

Once they got inside, Ace headed inside the bedroom, searching his shelf for something among a mess of papers.

While waiting for Ace to search for whatever he sought, Carson looked around this room.

For a bedroom, it was awfully plain and tidy—to the point of making him wonder if Ace actually slept here.

Once Ace grabbed out some stacks of folded and rolled papers, he slapped the dust off some of them, and threw them on the bed.

As each paper was quickly unfolded by Ace himself, they were revealed to be hand-drawn maps, and several written documents. When Carson’s attention was on one of the maps, he couldn’t make out the sketches, but the handwriting was readable enough.

“Was this… Ironport?” Carson asked, as he tried to piece together the names of buildings together with the messy drawings.

Ace nodded, as all the papers were now unfolded. “These are what I’ve gathered about that squad’s attacks.”

Carson stared at all the papers lying in front of both of them. “You made this all yourself?”

“Don’t you have Magic Council guys to help you out, or what?”

“Oh, I see… You were attacked back then, right?”

“I was.” Ace glared at Carson for a moment, before focusing his gaze on the maps. And he picked up a continent map, with several spots marked with names of people. “I still need to pay rent and such, so I haven’t had the time to travel and investigate any of these…”

“What’s with those names?”

“Names of that squad’s members I had gathered so far. No surnames and such—they change identities, after all.”

“Revenge,” Ace replied with a grim glare on the map, and he picked up another document with a list of names. “Here are the guilds those names ended up at.”

Carson accepted the guilds’ name list from Ace, and his attention was immediately caught by the Sun Rage bandits being mentioned in the list.

“Remember, everyone there changes identities. If you suspect anyone of that, bring them to me, or the Silent Tower. I’ll arrange the rest myself.”

Okay. Head back to the Sun Rage bandits, track down the Crescent Squad member and bring them back, also bring Markus back with him—that was the plan he quickly thought of. And he was threatened to join the group again, he had his own threats up his sleeve.

With Carson’s style of planning, some things were bound to go wrong—but he’d probably figure out something along the way. Should he risk with this one?